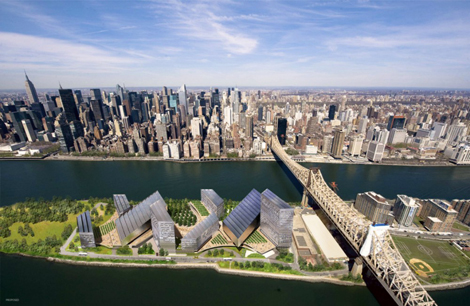 On Monday, December 19, New York City Mayor Michael Bloomberg announced that Cornell University had won the rights to build a tech campus on Roosevelt Island, bringing an end to a year-long competition that at one point had over 27 proposals. The 2.1 million square foot facility, made possible by a $350 million gift from Charles Feeney, will accommodate more than 2,000 students. And the city itself, despite occasional dissuasion, will provide the land and $100 million dollars.

Though an early contender, Stanford pulled out of the race last Friday. Cornell, as a result, now has full access to the benefits Stanford experiences in Silicon Valley, where its location allows it easy and preferential control of the tech scene there. Though MIT experiences some strength in Boston, the East Coast is still lacking in a high profile center, and Cornell is hoping to fix that. With rumors that a second school could be rewarded assistance on behalf of the city, outlook is positive.

While the city argues that a high profile tech campus will generate hundreds of new businesses, thousands of jobs, and millions in tax revenue, opponents argue that centering resources on a freestanding school of applied science will alienate both hard science programs and existing city campuses. Furthermore, an applied science focus, according to MIT researchers, ignores the fact that such a resource-draining investment is a long-term one, not one that will immediately reward the city with financial and institutional benefits. If the state of the tech community today is the sole call for construction, they say, it may as well be canceled.

With those issues in mind, though, it’s worth considering what the plan suggests, particularly for those invested in New York's tech community. As Silicon Valley (and just about every specific-market location) has shown, condensed resources and talent can have a positive effect on growth - not just making it possible, but actually perpetuating it. As Y Combinator founder Paul Graham argued several years ago, “A lot of cities look at Silicon Valley and ask ‘How could we make something like that happen here?’ The organic way to do it is to establish a first-rate university in a place where rich people want to live. That's how Silicon Valley happened.” Building upon its technical roots, Silicon Valley emerged as a tech epicenter by combing industry and education, and now New York is looking to do the same.

But Bruce Nussbaum, aware that Silicon Valley’s highly technical roots, argued yesterday in Fast Company Design that design itself is moving toward a new type of innovation, one culturally and socially driven and therefore ideal for New York. Silicon Valley may not, in fact, be worth comparison. Cornell, he argues, has poised itself nicely, aligning with a creative center with a broad history of diverse entrepreneurs. “The locus of innovation has been shifting away from the technological to the social, and from engineers to ‘culturistas’ for some time now,” he said. “As the soul of innovation moves away from engineering to the social and cultural, Stanford will surely begin to fade. In that sense, Stanford is losing more in not setting up in New York than New York is losing by not having Stanford.”

Though Cornell is not intended to be an incubator in its own right, the length of its development, with an estimated grand opening in 2017, suggests that its supporters are yet to buy into bubble talk, that New York may be capable of building something new entirely. As Nussbaum argues, we may, in fact, see the dissipation of our current coastal split, with New York, building upon its own history, leading the next great wave of innovation by redefining it entirely.

Published by Michael Abraha on October 12, 2022.
Previous post Autom the Robot and Her Weight-Loss Expertise ← December 20, 2011 Next post → Need Someone to Walk You Through an Investment in Real-Time? December 20, 2011