Many women will attest to the fact that guys are secretly fascinated by the magazines we read. Who among you, ladies, hasn’t caught your boyfriend… 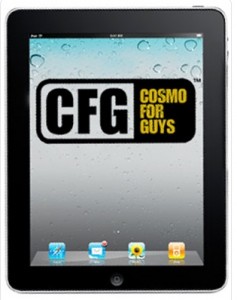 Many women will attest to the fact that guys are secretly fascinated by the magazines we read. Who among you, ladies, hasn’t caught your boyfriend flipping through your issue of Cosmopolitan? Though most men will claim that they are simply “looking at the pictures," we know that’s not the truth...or at least not the whole truth.

Cosmo itself can attest to this phenomenon, which is why it has developed the male-targeted iPad app, Cosmo For Guys (CFG). According to a report in The New York Times, Cosmopolitan Editor Kate White had this to say about her male readership:

I got a high number of e-mails from guys saying, ‘I love to look at the magazine, I sneak a peek at my girlfriend’s copy'...A line I’d hear a lot is that it’s like having the opposite team’s playbook.

Sports analogy aside, these guys may be on to something. What better way to broaden your knowledge of the opposite sex than by delving into their literature? Cosmopolitan is no Charlotte Bronte novel, for sure, but it offers a pared down, generalized guide to the modern female--an okay place to start for the estrogen-impaired.

The new app aims at expanding male readership by providing the coveted Cosmo content in a more “socially acceptable” form. Let's look at some reasons why guys might actually purchase CFG:

What are the features of CFG? 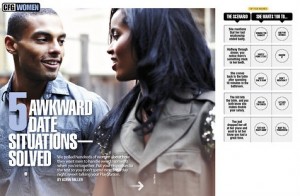 Sex, of course. According to the Cosmo FAQ, the first issue of CFG will feature: “Sexy (and hilarious) audio samples of women’s top five bedroom noises, plus the hidden meaning behind each” as well as “eye-popping 3-D sex positions, viewable from every angle, with advanced tips to help you master your skills.” Not hot enough? CFG also boasts a feature that tracks the sexual preferences of women in your area on Google Maps, based on the answers and locations of quiz takers on Cosmpolitan.com. The app also offers dating advice from the pros. Don’t know if you should get back with your ex? Is it weird that your date spends over ten minutes in the bathroom? Are some gifts more appropriate for birthdays than anniversaries? CFG, apparently, has all the answers.

This is a bold attempt on the part of a historically gynocentric magazine to reach out to a whole chunk of the population that its branding previously excluded. However, the application format will likely make the men who do come around more comfortable with the idea of embracing the Cosmopolitan name. CFG will be up for sale on the App store starting August 1 and will be available exclusively for the iPad.