According to a recent report from The Boston Globe, “During the last Summer Olympics, held in Beijing in August 2008, the iPhone — Apple…

According to a recent report from The Boston Globe, “During the last Summer Olympics, held in Beijing in August 2008, the iPhone — Apple Inc.’s groundbreaking mobile device — had been on the market for about 13 months and had sold only 13 million units.”
That’s pretty hard for us to wrap our heads around — life before the iPhone, that is — as a world without iPhones also entails a world without apps. Which is a far cry from today’s mobile scene in which over 500 thousand apps abound in Apple’s App Store alone, with over 200 million iPhones and iPads running them. This is not to mention the countless apps being run on the even more popular Android platform as well.
What does all of that mean for fans of the upcoming Olympics? Essentially, the London 2012 games this summer will be the first Olympic games that will reap the benefits of mobile apps and, with them, truly mobile coverage, from feeds to applications to live video streaming across multiple platforms. While we may never stop watching the Olympics on our TVs, we now can access the Games for the first time on our phones and tablets, bringing us closer to the Olympic Village, even if we’re miles from London.
These apps came at an interesting time in the mobile development world. While they’re by no means early on the app scene, they are the first apps made for the Olympic Games. And it shows; these apps are, for the most part, informed by a deep knowledge of the importance of social media and user interactions (evidenced by the abundance of Twitter-integrated, sharing-based features).
Without further ado, here’s our take on the best and worst Olympic apps:

With NBC as the official provider of Olympic Games coverage in the United States, it’s fitting that the media conglomerate came out with a mobile app to match. The app in question has everything you’d expect from an Olympic app: news, athlete coverage, Team USA page, and videos and photos galore. One feature we liked is the “Hometown Coverage” page, which creates a news feed featuring stories involving athletes from around your zip code. Another con is that it’s also a bit sluggish in terms of loading time, perhaps due to the plethora of multimedia content.
Besides NBC Olympics, the company has also rolled out another app, NBC Olympics Live Extra, which streams live event videos, as well as offers replays after the event. Unfortunately, to take full advantage of this app, you’d need to be a paid cable or satellite subscriber. 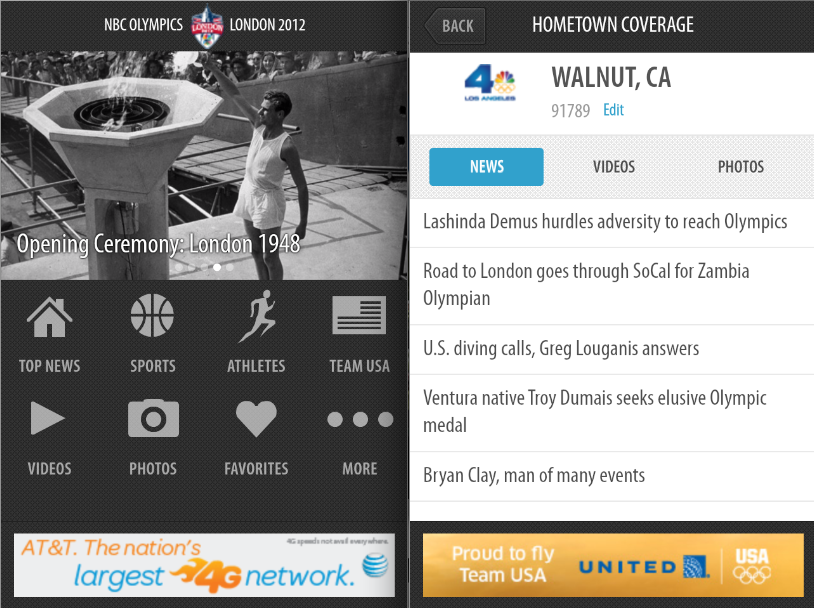 Based on the smorgasbord of “Donate” and “Shop” buttons on this app, it seems like Team USA’s betting on it to be a moneymaker. Besides that, this app is pretty no-nonsense and has your basic features from news to event schedules to sports and athlete profiles. Despite the almost spartan look and feel of the app, it does contain athlete profiles for each qualifying member of Team USA that go beyond just the stats. (On Kobe Bryant’s page, a fun fact lists that his parents named him after “a type of steak seen on a restaurant menu.”)  Unfortunately, this app is perhaps even slower than the NBC app, which kind of overrides our desire to learn fun facts about Olympic athletes. 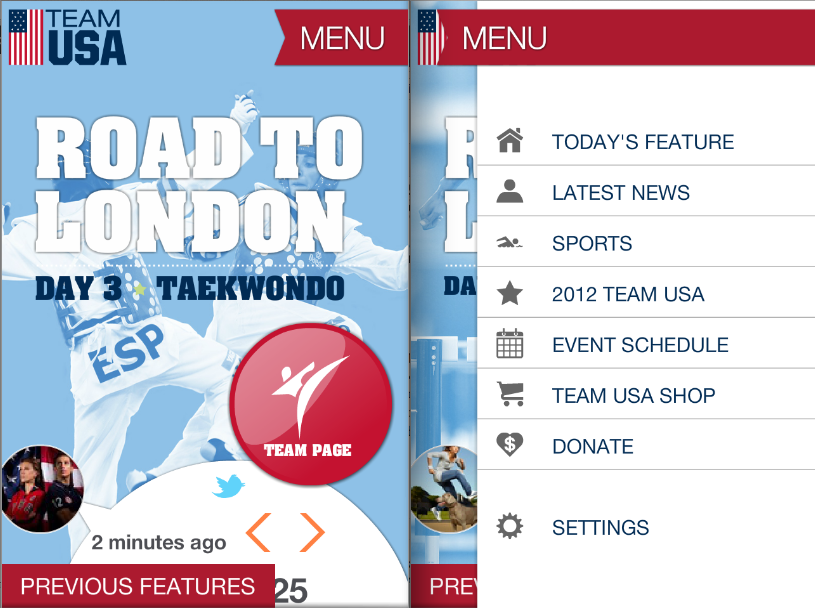 Perhaps the most feature-rich app out of the bunch, this official app from the London Organizing Committee has almost everything you could possibly need, that is, while you’re at the Games. With features like event schedules, maps, and guides to everything from safety and security to ceremony procedures, the app is definitely geared towards those who are lucky enough to be in London in the coming weeks. The one annoying feature of this app is that it seems to have to download updates an awful lot, and the download itself is automatic upon opening the app. On the upside, it is the fastest out of the Olympic apps otherwise.

Like NBC, the London Organizing Committee chose to release two apps for the Games. Besides the official app, interested users can also download the Official London 2012 Results app, which is similar to the Join In app in layout, but more geared towards those interested in the stats for each sport.

The Reuters app is the least extensive of the Olympic apps on the market, but it’s saved by the fact that it features beautiful, exclusive photography of Olympic happenings straight from Reuters. It also contains a cool social media component that displays all the tweets related to the photos, as well as accompanying articles. One complaint would be that the articles aren’t optimized for mobile platforms design-wise, but otherwise, the app is clean and well-designed. Unfortunately, it’s only available on iOS for now.