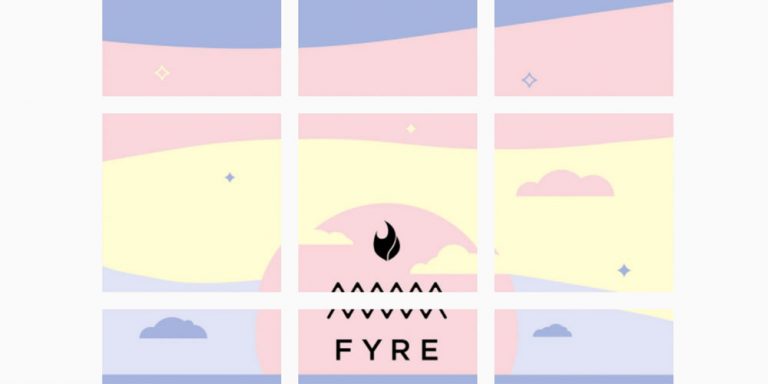 When the aesthetic is more important than the user experience - the lessons of Instagrids, Instagram tiling, and Fyre Festival.

Is an Instagram feed that looks ~cool~ the kind of extravagance only the young and privileged can pull off?

As with all things aspirational — ugly pants, shadow roots, and magic dirt — the Instagram grid that prioritizes a cool wall over the experience of your followers snuck up on me. Several brands were on it before I twigged.

You'll know it when you see it. As you scroll your feed, a weirdly zoomed and cropped photo of a rollercoaster strut will occupy your screen, followed by another cropped and zoomed piece of the puzzle. Then seven more. If you click out to that person's feed, you'll see that the photo has been subjected to the high art of Instagram tiling.

A series of apps make it easy to slice a photo up into parts then lay it into your feed. Instagrid is perhaps the most popular, but there are many, such as Tile Pic and PicSlit (</3). At first glance, the effect is artful. Ahh, you think, look at this beautiful large-format picture of this thing. Except the grid version of a photo is merely the same size as a regular Instagram. It's a photo, only with white gutters running north-south and east-west through it. Importantly, there is rarely a greater artistic meaning to the individually cropped photo.

Instagram tiling is popular among brands wishing to use their feed as a kind of homepage, but was used to excess by the viral flameout of an event, Fyre Festival.

The Best Curated Disaster of All Time

Viewed on the far side of the Fyre Festival disaster, it's a bit of a larf to view the art-directed countdown ("nine days," "three days") knowing that things ended in FEMA tents, cheese sandwiches, and evacuations. But the Instagridding itself seems somewhat of a portent. Instagram tiling requires a wanton act of Instaspamming. Therein, the user drops multiple pics into people's feeds at once. It's an act I — a nobody of no influence — would never dare commit, but one that #Influencers, cushioned by their confidence and privilege, feel entitled to carry out in service of the #aesthetic.

In this way, it mirrored Fyre Fest's Achilles heel: a billowing sense of entitlement that sank under a lack of experience and preparation. Sold by the branding alone, the moneyed cashed in on the opportunity to experience an exclusive party on a remote Caribbean beach. The destination: a relatively unpopulated place where the rich kids of Instagram could wear their feather headdresses without battling critiques of appropriation. It was an opportunity to "Columbus" a new island, not yet geotagged. It was an #experience designed for social. And it went hand in hand with the Instagrid.

Fyre Fest's use of Instagram tiling seems instructive for two reasons. One, it is a cautionary tale against hyper art-directed endeavors that aren't backed up by substance. Certainly, a warning not to trust inexperienced 20-something organizers with too much money. Two, it is an example of aesthetic exceeding the functionality of the user interface. The third-party apps that allow users to hack their feeds expose some of the key weaknesses in Instagram's design. Foremost, there is no option to mute a photo from appearing in people's feeds. Instaspamming is unavoidable to achieve the perfect Instagrid. Likewise, the Instagram wall, a true analog for user's posts, is therefore disrupted every time they post, unless they upload three posts at a time. There is no option to anchor or pin posts.

Perhaps Instagram is planning on addressing these UI issues. It will be interesting to see how it addresses the jerryrigging of the platform.

How Not to Annoy Users

*Don't bother searching for #tiling, you'll just wind up with a series of hip photos of people applying grout.