Despite a lackluster welcome and an eventual decline in attention, Google hasn’t given up on its eponymous social media platform. Google+ is, at its best, a patchwork of successful elements from more-popular networks — primarily, of course, Facebook. The parallels are neither hidden nor explicitly mentioned, and Google has made some design changes recently that show its ambivalence toward Google+’s big brother of sorts.

“Toward a simpler, more beautiful Google,” reads Wednesday’s redesign announcement on Google’s blog. The first image you see above the fold is amusingly representative of the kind of branding dissonance you’ll find on Google+ — two clean-cut, pretty blonde girls smile as if for a family portrait; their faces are covered with paint. “Festival of Colors” is the album title: subtly suggestive of something perhaps multicultural, certainly family-friendly, and (given the paint) trying for excitement. Look, Google+ is edgy! But not too edgy.

We don’t mean to deconstruct a simple stock photo so critically; Google is of course not the first or the only media platform to forgo specificity (authenticity?) in favor of an inoffensive image. The strange effect of this photo, though, illustrates what the new Google+ redesign offers: pretty images, colorful but totally non-objectionable content, and strangers rather than friends.

Fast Company’s Co.Design notes the welcome addition of the Navigation Ribbon, a left-hand-side vertical banner that collects oft-used links in one place, using large, friendly icons. Google+, in its announcement, seems particularly excited about the customization options this new feature offers — you can arrange the icons as you wish.

Given Google+’s greatest drawback — the smaller number of users, relative to giants like Facebook and Twitter — the “Home” and “Explore” tabs are somewhat redundant. Your Home tab is meant to display a stream of updates from those in your “circles,” but it also collects posts that are “Hot on Google+” — a trending function similar to Twitter’s promoted tweets. The Explore tab offers these as well, in an effort to get users to engage with celebrity-posted or universally appealing content. 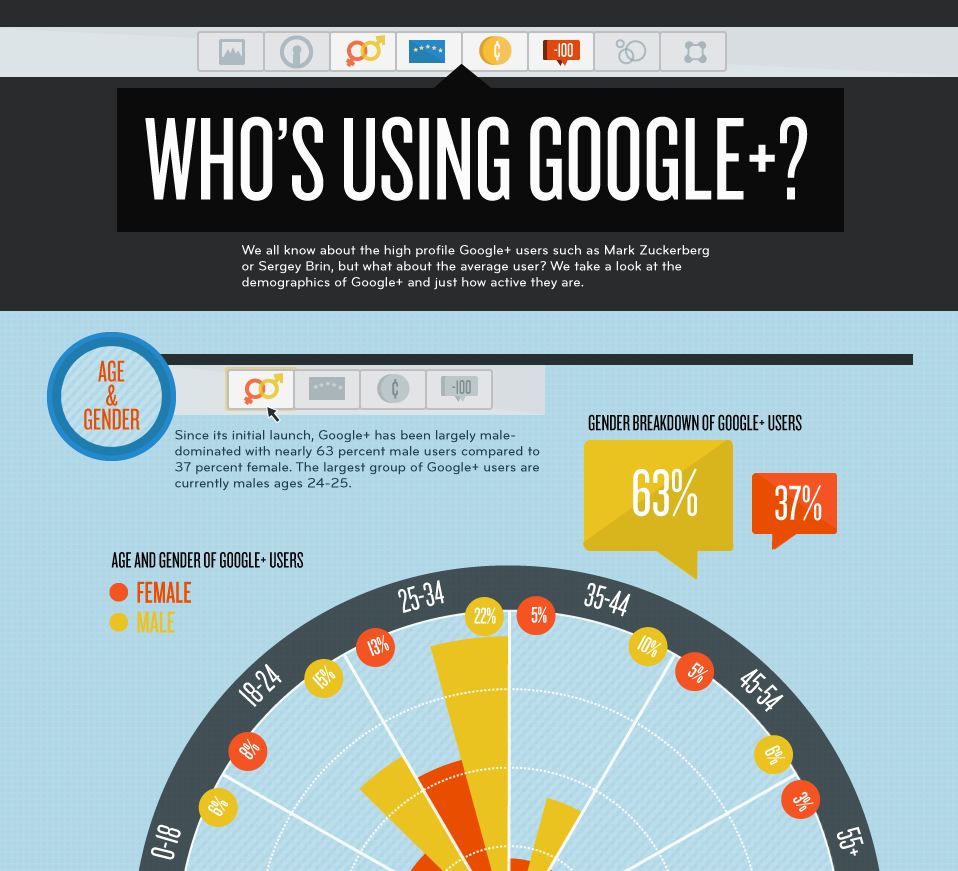 This is another area where Google+ seems to lack focus and audience awareness. Upon signing up for the service, which Google calls “upgrading” in an effort toward brand consistency with the “+” function, the users and personalities it suggests you follow are amusingly out of touch. Google’s Senior VP of Social Business is the second of the “Interesting People and Pages” displayed — a very direct social-marketing ploy, and not an online personality most Facebook users, say, would choose to follow. Some other gems: the first musical artist featured is Pearl Jam (because it’s 1991). The Technology section, one we might expect Google to have a stronger handle on, features Tom the Myspace guy. Not exactly forward-thinking.

The presence of that Google VP speaks to what’s perceived as one of Google+’s greatest shortcomings. When Google announced “Search Plus Your World” in January, a campaign aimed at making Google+ an integral part of the “social search” experience. The redesigned platform, many worried, allowed Google to promote its own products and services above others’, weakening its core functionality as an objective Internet indexing agent. (Last December, for example, Google began displaying results for its own flight-search service at the top of the results page when users searched for air travel.)

This self-promotion translates over to Google+, of course — their VP of Products has said that “Google+ is Google itself.” Alarming, and already quite visible: TechCrunch notes that Google+ profiles feature heavily in search results (and auto-completes) for individuals of all degrees of celebrity.

Yes, the design is lovely and intuitive. But for a better example of re-branding a platform or product that’s generally seen as obsolete, look to Internet Explorer 9’s new campaign. Called The Browser You Loved To Hate, IE9 launched a Tumblr (compare the trendiness here to Google’s Blogspot — though, of course, they own Blogger) poking fun at its own outdatedness — and successfully promoting its Web 2.0 update. The image-heavy design and the very Tumblr-esque layout send a clear message: we know what you used to think of us, and we changed.

The platform is successful because it’s personal and direct, two things which Google+ is emphatically not. Might Google+ win more users if it referenced its own status as the forgotten middle sibling of social media? Or included in its rhetoric, as IE9 does, tweets and comments from ordinary users rather than those who are “Hot on Google+”?

Perhaps the failing has something to do with linguistics. Google+’s basic interactive function is the “+1” which, besides having already been branded by socialites and mathematics, can’t be easily turned into a verb. You like something on Facebook; you tweet something on Twitter; you pin something on Pinterest. “I liked that,” “I tweeted that,” and “I pinned that” are wholly acceptable to say out loud. “I plus-one’d that” is clunky, fumbling. The signifier both doesn’t fit and is too ugly for the signified.

If talking about Google+ is difficult or unwieldy, it’s far less likely that the product itself will have the precious element — sheer numbers — that’s drawn users to Facebook and Twitter. This, ultimately, is the absent effect that’s keeping people off of Google+: you can’t be social in a ghost town. The lovely redesign, then, feels fairly hollow upon launch — Google+ claimed 90 million “registered users” in February, but as Venture Beat notes, this statistic means little compared to the number of daily active users (Facebook: 483 million).

Google+’s redesign might convince users to spend more than 3.3 minutes per month (again, Facebook: 7.5 hours) on the network. But stylish graphics and increased usability mean little when there are so few people there to share them with.