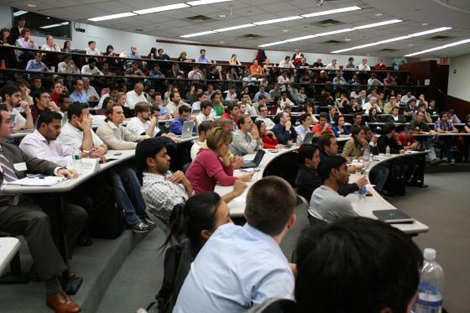 Al Chen is Ultra Light Startups’ social media and blogger guy, providing insights and observations about the startup community in NYC. Al currently works at Google in sales analytics focusing on the TV Ads product. He previously worked in finance at Google and attended NYU Stern School of Business for undergrad.

This month’s pitch contest got a little more interesting. In addition to the usual opportunity to pitch at NY Angels and for Amazon Web Services credits, Fueled offered a scholarship of $5,000 of their services at 80-pecent off to the winner of the pitch contest. This scholarship essentially gives the winner of the contest professional-level creative and development services at sub-freelance rates. More can be read about that here.

The winner of this prestigious scholarship, as well as other great prizes, was Viktor Marohnic from ShoutEm. ShoutEm will definitely benefit from this scholarship, as the startup itself is all about creating apps for mobile devices. Shoutem is a mobile content management system app-building tool that gives users the ability to build apps for as little as $30 per month. The website is very well done and appears to be geared towards non-technical people. The main competitive advantage of the tool is providing high quality designs for its users. This app addresses an easy problem of getting apps submitted through the App Store and already has 10,000 registered users, but only have 150 apps have been submitted. Mark Wachen suggested that the founder should look at improving the conversion rates for the registered users.

January 2012’s meet-up had another great panel. I remember Gil Beyda of Genacast Ventures from a meet-up a few months ago, and he always gives great criticism of all the pitches at this event. Art Chang from Tipping Point Partners talks about looking for businesses that can generate revenue three to nine months after launching. Chang is also the CEO of various companies at Tipping Point such as Cookster. Micah Rosenbloom is a new panelist at ULS from Founder Collective. Micah talked a lot about a new company he’s working with called Boundl ess Learning, where you can simply enter an ISBN number and it brings up all the content from those textbooks. Mark Wachen is back from Dreamit Ventures, which is an accelerator program for new startups providing office space, legal assistance, and accounting services, among other benefits, to budding startups. He talked about a new startup he invested in called YouNow.com, which provides musicians and their fans a real-time way to vote for music they like and don’t like. All the panelists seemed enthusiastic about winning the “best panelist” Twitter contest, and Beyda even wrote on the board behind him to vote for him which got a few chuckles from the crowd.

Little Compass is a platform for kid-friendly businesses that allows parents to find activities for their kids. They have 2,500 member businesses including some big names like the Guggenheim. Beyda asked a great question concerning how you find the parents in the community. Joana Anker, the founder, talked about contacting all the big parent communities in New York City through blogs and organizations. A lot of the feedback was geared towards getting more traffic and ways to involve social media. When it was time to give the feedback, the panelists drew a laugh from the crowd as they all talked about the number of kids each of them has. Beyda won that “contest” by telling the crowd he has four daughters to deal with.

The founder of Paperlex started off the pitch with a bold statement saying she’s a lawyer and has created her startup for small to medium-sized businesses to handle their legal work. The solution takes care of the entire contract process. A lot of questions were asked about the target market and how to attract the small to medium businesses. Paperlex is focused on using its current relationships and channels to find these leads.

Francisco at LifeWellth started off with a great hook to get the audience paying attention. They address the young market (people between 24- and 54-years-old) who need advice on investing given the fact that a majority of their funds are earning 0-percent interest. People are not going to meet their goals if they are not investing correctly right now. Francisco said they have 1,500 users with $30-million from users for whom they are providing advice. As the questions rolled in, there seemed to be a lot of confusion about where the funds go and how the service works for every individual’s risk profile. Chang seemed really interested in the target market as they are an under-served group, as this young demographic is not going to invest the way their parents did.

CarGuyNation focuses on bringing together consumers, vendors, and content providers on specific enthusiast products and services, including those that pertain to motorcycling, hunting, and equestrian, among other activities - essentially a Groupon-like service for enthusiast products. CarGuyNation partners with a lot of online forums to get members to buy these products and the forums get a commission on all the sales. The target market is the key according to the founder, expounding on the fact that these consumers are avid social consumers with a lot of disposable income. Most of the advice was on focusing on the car enthusiasts first before going to other verticals. The founder also handled the Q&A section very concisely as most pitchers tend to ramble on about their startup, while the founder answered each question very matter-of-factly and did not provide irrelevant details.

AppsBidder focuses on helping underrepresented app developers get their app noticed in the App Store. They build a game around the App Store by giving users an incentive to download more apps. Most of the criticisms from the panel were about doing too much in one space, suggesting they instead focuse on one aspect of apps to help them get discovered. Chang also mentioned the “Top 100 Loop” syndrome where the top 100 apps will get cycled to the top of the list, making it hard for other apps to get noticed.

Prodideo is a website that helps you articulate what you want to sell and buy through videos and PDFs. The startup has been up for about a year and a half and summarizes everything you want into an email link and QR codes. There seems to be some general confusion among the panelists about how the site is different from Craigslist. Micah pointed out that the UI needs a little work so that the user understands right away what the site is about, just like someone visiting YouTube knows that the site is about videos.

Vehive is a reservation platform for ground transportation ranging from cabs to limos. The founder has a pretty impressive resume that includes Goldman Sachs VP and launching a food brand at Whole Foods. Rosenbloom asked a loaded question since he is an investor in Uber, a competitor with Vehive. Someone in the audience asked a question about how Groundlink competes with Vehive. The founder responded that the main difference is that Vehive has affiliates and they set their own prices, but the man in the audience who asked the question asked if the founder was sure about that fact, and Graham cut him off with the usual “no follow up questions.” That drew a small laugh from the audience.

The next Ultra Light Startups meet-up will take place on February 9 at the NYU Stern School of Business. Tickets begin at $20, but Fueled will be giving three away to our Facebook fans. To enter the drawing, join our Facebook page and stay tuned.