My friends and I used to try to one-up each others’ street hollers - or what some may consider experiences of street harassment, flattery, or… 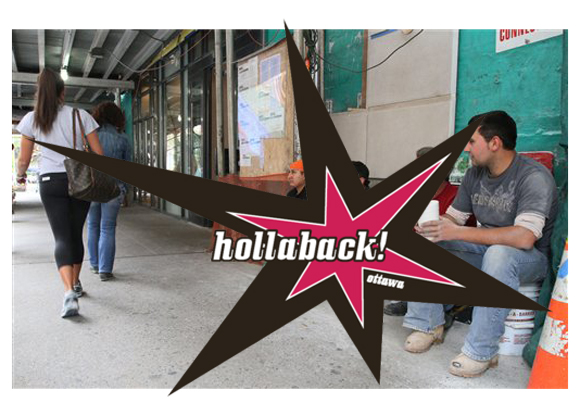 My friends and I used to try to one-up each others’ street hollers - or what some may consider experiences of street harassment, flattery, or assault. There is nothing exceptional about us; simply being female in big cities gave us fodder for multiple rounds. The dialogue often went like this:

"While I was grocery shopping some guy hollered at me on Fifth Avenue and reappeared on First Avenue to ask me out."

"Last night, a guy I met at Library Bar got in my cab and stood outside my door for 30 minutes."

"On Saturday, I came home at 2 am, and some guy was sitting on my doorstep. I asked him to move and when I turned to put the key in the door he grabbed me. I’ve never screamed so loud in my whole life."

In short, temporary edification in a crowded bar or a sunny street can morph into a terrifying encounter that leaves you a shell-shocked, hollowed version of your once sparkling self.

The Hollaback! app (and movement) expands these private conversations by providing a way for people to publicly report notable street interactions. The app allows you to take a photograph of the harasser, classify the type of harassment, and later, write up a detailed account. Better yet, it registers your location and can notify authorities about harassment hotspots. It may not be as deterring as pepper spray, but it does connect a network of women who find this behavior unacceptable. "The goal of the app," says Jill Dimond, the lead developer, "is to provide a way for people to do something about street harassment and to feel empowered in the moment when they experience it."

I asked an acquaintance who I caught cat-calling what he wanted out of the gesture. "I just want acknowledgement," he said. In response, I decided to try smiling, saying hi, even dating a guy who practically mugged me. Sometimes the "harassers" were kind people with substance and humor, and so, perhaps the term harassment should be used more selectively. Dimond explains, "Street harassment, at its core, is a power dynamic that constantly reminds historically subordinated groups (women and LGBTQ folks, for example) of their vulnerability to assault in public spaces."

The Y-chromosome validation we work so hard for is destructive in its own way. But our individual cries for attention are a separate issue and not a free pass for intimidation. When a man physically blocks your movement  and you can't understand what he's saying because your iPod is on too loud and the people walking by fade to the background, witty remarks and a friendly smile won't stop his hand from touching your face.  Running away makes you feel like a victim and reporting the incident is often too little too late.  Hollaback! takes our physical and mental safety into consideration while addressing larger societal issues surrounding street harassment.  "We aren't a mini-police force," says Dimond, "and we aren't looking to target individual perpetrators. We're looking to bring attention to a broader epidemic." The app has also sparked debate about harassers themselves. Dimond says, "We see street harassment emerging from a broader culture of discrimination that crosses lines of race, class, and culture. This issue is bigger than just street harassment, but through street harassment, we can begin to chip away at these beliefs and ultimately create a world where everyone has the right to walk down the street feeling safe and confident."

The Hollaback! team is capitalizing on the mosaic of stories collected. They are working with Cornell University to analyze content so researchers can get a better understanding of the emotional impact of street harassment. They are creating a Wiki-type system for mini-traumas that may help people understand why their breath escaped them, the normality of bystanders acting nonchalant, and how wanting attention does not mean you deserve harassment. Hollaback! is even releasing a new version of the app so people can report details of their story online and bystanders can also contribute.

By recognizing that hollering can be flattering, we can highlight the fact that some unwanted attention leaves women and girls terrified, insecure, and devastatingly muted. When we absorb the attention our mentality can shift: I shouldn't  laugh so much, talk too loudly, make those jokes, bring up this topic, or express my desires. I am safer when invisible. There is nothing fun or cute or sexy about wanting to disappear. The presence of the app on your phone is a constant reminder that you are not the first or last person this will happen to. Being harassed doesn't make you special or not special, dirty or daring. It means this person has his own set of problems. It means society is suffering because power dynamics play such an unsettling role in social interactions. But most men aren't predators. They are too nice, ambitious and lost in thought to ever voluntarily make someone else feel threatened. Hollaback is gathering statistics and information so both genders can communicate more effectively.