HowAboutWe is Online Dating with a Classic Twist

It’s difficult to imagine what, say, Ovid would have thought of online dating. An entire industry centered around what may be most readily described as…

It’s difficult to imagine what, say, Ovid would have thought of online dating. An entire industry centered around what may be most readily described as an illness? His modern day equal could probably speak at length about the shortcomings of algorithms in matchmaking, mathematical approaches perhaps over-thought.

That being said, the years since such services first emerged have seen increasing trust in humanized search. HowAboutWe, launched in 2010 by best friends Aaron Schildkrout and Brian Schechter, is centered around a belief in simplicity and naturalism, an approach that has garnered press in places like the New York Times, GQ, and Gawker. “The traditional dating sites - the big names everyone knows - seemed unnatural and out-dated. For many people, online dating can feel like ‘biting the bullet’ because the experiences out there didn't match the way today's generation uses the web,” Erin Scottberg, media strategist at HowAboutWe, said. “HowAboutWe was designed to feel natural, more real, and more fun.” 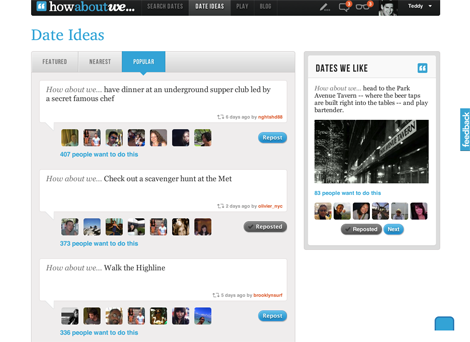 Now with more than 300,000 users, 98-percent of whom have a bachelor’s degree or higher, the service can boast about the success of its founding function: singles proposing dates simply by completing the phrase, “How about we...” In turn, those interested in the proposal - initially sent, essentially, into space - check out your profile and message you. The bet, of course, is that the first date - often make-or-break - will, at the very least, be centered around an activity you already love. “After all,” Scottberg explained, “dating doesn't happen behind a computer, it happens out in the real world.” The natural, somewhat intuitive approach gets users away from the computer and out into the real world quickly and sufficiently, lessening the need for endless back and forth messaging by taking care of plans first and foremost.

According to Scottberg, users of the service have stuck largely to its original aspirations, not veering of course with quick browsing and pre-proposal messaging. “In fact,” she explained, “every time I meet a couple who met on HowAboutWe, the first thing they do is tell me the story of their first date.” The site goes as far as to dispel the often superficial side of dating by using an algorithm that overlooks most details related to looks and physicality; as stated on the site, “Things like eye color, body type, and income are either (a) easy to figure out from pictures or (b) things that people tend to omit or exaggerate. We want our profiles to focus on characteristics that will enhance the process of going on great dates.”

With such weight placed upon the first date - the ultimate first impression, according to the founders - it's important that users be descriptive, hastening the call to action. To bring everything a step further, HowAboutWe recently released a mobile app that seems, in many ways, more in tune with the overall mission. By providing real-time access to nearby singles and venues, the app adds a certain tasteful spontaneity in the middle space between, for example, Match.com and Blendr. There’s more to come in that regard, too. “We're focused on creating a product that helps people find the relationship they're looking for and continue to launch features that augment the HowAboutWe experience,” Scottberg said. As the team slowly but surely seeks to create reality out of digital interaction, they move step-by-step toward success only at the welcome sacrifice of labor.