If you have an iPhone and a  bit of a god complex you’re probably one of the 4.5 million users who have already downloaded Tiny… 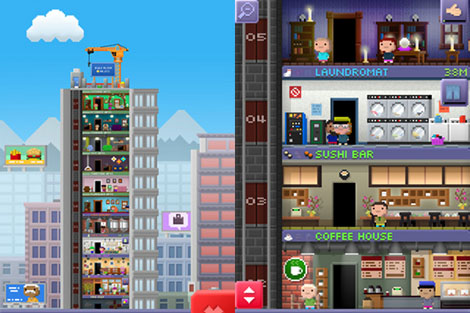 If you have an iPhone and a  bit of a god complex you’re probably one of the 4.5 million users who have already downloaded Tiny Towers. The New York Times Bit Blog reported on the app’s rapid ascension to popularity since its June 22 release, comparing its growth rate to that of the massively popular iPhone photo app, Instagram.

Tiny Towers takes on the time honored fascination with creating and controlling virtual lives. The game is kind of  a cross between Tamagatchi toys and The Sims. You start out with a simple single-story building and a big dream. The goal is to take your small structure to the next level (literally) by expanding upwards and populating your building with apartments, shops, restaurants, and of course, Bitizens. Bitizens, as you may have surmised, are the “people” who inhabit your virtual world, thus named for the retro 8-bit style that the developers employed in their design. Just like the Tamagatchi’s of yore, you can carry these pixelated people around in your pockets while monitoring and managing their lives. Tiny Towers even includes a built-in social network for its citizens call “Bitbook” where you can learn about and keep tabs on your tiny creations.

Don’t be fooled though--playing virtual god to the Tiny Tower population isn’t an easy job. Just like the characters in other simulation games, the Bitizens won’t prosper if ignored. They may not end up face down weeping in puddles of their own piss (yeah, The Sims goes there), but businesses will suffer and your tiny tower may quickly become a gigantic dump. And being that there’s no way to pause the game (hey, you can’t pause LIFE, can you?) you’ll have to stay on top of things. This actually works out because from what I’ve heard this game is very, very addicting.

Simulation is a technology trend that has sustained itself since the early 90s. I’m sure that there are tons of psychological implications to getting involved in these types of games. What are the real world ramifications of divorcing responsibility from real life consequences, for example?  If your “offspring” are floundering, for example, no problem, just restart the game. If your business is tanking, same thing. Is this damaging to the psyche of an obsessive gamer? I’ll leave these musings to the psychologists and  cultural critics for now. I have to get back to my Bitizens.