It’s Not Words vs. Content: Where Traditional and New Media Meet

The digital-age debate about the future of print media isn’t going anywhere — and we’re sure you’re sick of hearing every theory posing as unique.…

The digital-age debate about the future of print media isn’t going anywhere — and we’re sure you’re sick of hearing every theory posing as unique. There are a few colossal names in publishing, though, who have taken a surprisingly progressive stance on the future of print. Exhibit A: The New Yorker, Condé Nast’s paragon of journalistic quality.

The magazine has been tentatively embracing the digital shift, offering exclusive content on its cross-platform apps — a phrase we’d have scoffed at in conjunction with this particular publication just a few years ago — and going so far as to put longtime editor Nicholas Thompson on the digital beat.

All this is not news, of course. The stodgiest of journals and newspapers have been offering online or app-based content for years; few are left at the top of that slippery slope. And what’s at the bottom? It seems we’re facing a semiotic shift. No longer do we read words — we consume content. We don’t read magazines — we engage with brands.

Or so goes the argument, shouted forth from the twin forts of tradition and progress. There is the requisite mention of shortened attention spans, of the aesthetic and tactile joys of paper, of the relative merits of a 140-character limit. But that argument is evolving. Walls are coming down.

Case in point: Next Issue Media, which comprises Condé Nast, Time Inc., Hearst, Meredith, and News Corp, is to launch a service AdAge has called “Netflix for tablet editions.” Beyond the clear links between print and television (a rivalry that’s several decades more established — and perhaps representative of the repetition of this all?), the platform does something else that’s curiously forward-thinking. It blurs the limits between individual magazine brands and places value squarely on the content itself. 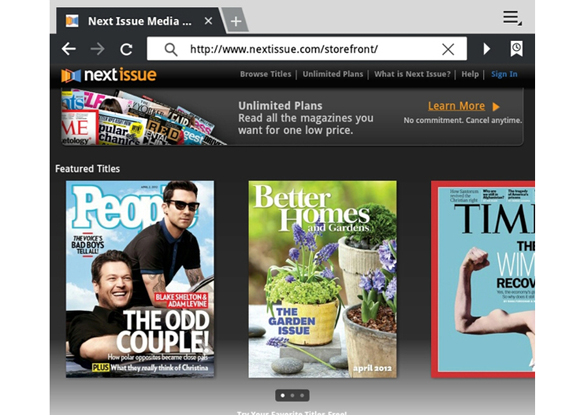 There’s a wide range of publications available, to be sure (Popular Mechanics, Esquire, People StyleWatch, and so on), and while the vast majority have previously released apps or digital editions, those have been limited to just the one mag. With Next Issue Media’s proposed service, though, you read all included titles within the same app. Access to all monthlies and bi-monthlies is $9.99, and a $14.99 subscription includes all weeklies as well. (Interestingly enough, Time Inc. introduced a very similar program in 2007.) In order to, one hopes, make browsing more convenient, individual brands lose a bit of their delineation.

So what does this say about the way we consume? (Remember, it’s “consume” now, not “read”, and we don’t know how we feel about that, either.) For all the talk about long-form journalism being at odds with digital content, there’s been a notable and quite recent upsurge in our consumption of words. A lot of words. Sites like longreads.com and longform.org (they’ve got various tablet editions as well, obviously) have likely doubled our daily word-count intake here at Fueled, in terms of actual (and actually absorbed) journalism.
This is the purported goal of a cross-brand tablet edition, too. If you start reading within one magazine, you’re more likely to switch over to, say, GQ once you’ve finished an article from Fortune. That means more reading and, despite the crossover, more brand awareness for each of those publications — like a handheld waiting room strewn with copies you might actually be interested in. (Though oddly enough, it’s not cross-platform yet: the app will first be released only on Android tablets, though NIM plans to submit an iOS version for approval soon.)

That print-media bastion again, The New Yorker, is less gung-ho than other magazines on the subject of branding. Editor-in-chief David Remnick told WWD that, while he still sees crucial support at Condé for “the most important thing — editorial freedom and independence,” he “[doesn’t] much love the talk of ‘brand’ and ‘brand managers’.” Editors are increasingly choosing the latter as job title and conceptual mantle.
That means, quite simply, much more work. Editors are dismantling the walls of the industry’s version of an ivory tower in order to encourage collaboration and dialogue — a task that requires constant strategizing and a fluid, forward-thinking approach to a previously static structure. We’re particularly familiar with this in the tech industry, and the editorial sensibility of publications like TechCrunch and Betabeat shows that strangely productive osmosis.
What interests us most is the way that media overlap can foster real discussion, real analysis. We at Fueled got into the mobile and digital industry because of that oddly intuitive — and certainly addictive — link between app and thought process. It’s a structure that’s at once purely subjective and awesomely community-oriented. Content you read on apps like Next Issue Media’s are meant to be shared: content as fodder for dialogue. (Sure, the parallel argument about conversation online vs. face-to-face applies here — but you’ve heard it a million times, and we find it far more cool to consider the implications of our changing relationship to words.)

As social-media enthusiasts, we’re pleased to see the old guard investigating the potential of new forums. Rather than a reluctant concession to the kids, we get innovative content and evolving modes of presentation. Think the New York Times’s Lively Morgue Tumblr, which publishes historical photos from its millions-strong physical archive of prints, contact sheets, and negatives — true to the spirit of the photo-happy blogging platform.

The blog’s about page jokes about the minor cognitive dissonance it presents — “Why would anyone come to Tumblr to read a long-winded introduction?” — and proudly claims that “these photographs give lie to the idea that the New York Times is not a picture newspaper.” We don’t think it’s a stretch to replace picture with social media.

But the Times has been on the cutting edge of digital media before such a concept even existed. (No, don’t laugh.) The newspaper’s exhaustive archive index, dating back a century and a half, is now providing a model and basis for the semantic web. This immense data set will help researchers and developers to construct what some are calling Web 3.0: an Internet that can form semantic links among data and content. One that can, in effect, understand — like the flashing of infinite digital synapses.

It’s a thrillingly, horrifyingly complex proposition — and we’ve come a long way from magazine tablet apps. But we believe there’s a crucial link. Digital-media platforms that seek to mimic and understand the way we think and read — “engage with content,” if you’ll forgive us — are not at all antithetical to writing and editing. In fact, it’s the publications most steeped in tradition who recognize the potential of something as small as an app.

So if the word “brand” is the price we have to pay for content that learns, shifts, and changes with new forms of media — well, so be it. Words aren’t dying off. The way we read them is just based on a new form of semantics.