Last night, the organization “LulzSec” successfully hacked into the homepage of The Sun, a sister paper to the now defunct “News of the World.” The…

Last night, the organization “LulzSec” successfully hacked into the homepage of The Sun, a sister paper to the now defunct “News of the World.” The papers were published by News Corporation, whose CEO and Chairman Rupert Murdoch is facing allegations involving international phone hacking and bribery conducted by his company.

The Return of LulzSec

LulzSec, which supposedly disbanded in June due to trouble after their hacks on the CIA, US Senate, and Sony Entertainment, apparently resurfaced for this hack, stating on their Twitter that they “couldn’t sit by with their wine watching this walnut-faced Murdoch clowning around.”

Charles Arthur for The Guardian reports that the attack was "two pronged...one was to break into its email archive; the other was to hack and "deface" the site itself, by putting up a fake story." Together with hacker collective Anonymous (@AnonymousIRC), members of LulzSec infiltrated The Sun’s website through some weaknesses in an outdated "Contact Us" form, which gave them access to an email database. The hackers also re-routed the homepage to a fake cover story reporting that Murdoch had actually died. 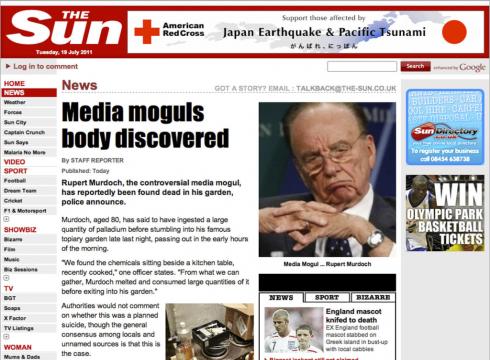 As Arthur reports, "The hoax story suggested Murdoch had taken [the rare-earth metal] ‘palladium’ before ‘stumbling into his famous topiary garden late last night’. The page later redirected to LulzSec's Twitter account." Spokespeople for News International have not commented much on the attack other than that they were aware of what was going on.

Is the worst of this over?

LulzSec would have us think that their attack went deeper than a bogus story. Arthur reports that, "A number of email addresses and passwords were being tweeted last night on various feeds – implying that the hackers may have gained access to the email archive and be preparing to release it." The twitter account of AnonymousIRC has also released a number of names and phone numbers of employees dating back to 2007. Arthur say this "implies that they may have access to email archives dating back to when some phone hacking occurs." If this is true, we could expect to see some major news unfolding in relation to this case.

Our home is full of artwork. Photos my wife…

Best Note taking Apps for the iPad and iPhone

Whether it be for your meeting with your manager or…

Cone Is A Well-Designed Color Picker for Designers

Oddly enough, I have a high bar for color pickers.…

BlockFi is multi-purpose investment and management platform which helps users…