NFC explained: why PayPal and Google are courting Near Field Communication

Remember Bump, the popular app that introduced us to the wizardry of physical touch data transfer? For those who aren’t acquainted, Bump lets you instantly…

Remember Bump, the popular app that introduced us to the wizardry of physical touch data transfer? For those who aren’t acquainted, Bump lets you instantly exchange contact information with other Bump users by simply holding your phones together. Cool, right? Apparently this is small potatoes compared to what a new close range transfer technology may allow us to get away with in the future.

At last Wednesday’s  Mobile Beat Conference, PayPal announced that it will implement Near Field Communication (NFC) technology, enabling phone-to-phone money transfers on certain Android devices. “PayPal used to be an online company,” said Laura Chambers, Senior Director of PayPal’s mobile division, “but we see the majority of transactions are being substituted for offline transactions.” Paypal’s plan is to make transfers between two parties even more convenient. Need to send money to the guy sitting next to you? No problem. Just tap your phone to his and presto-chango! your cash is now his. The catch is that the Samsung's Nexus S is currently the only NFC enabled device that supports the Paypal widget. However, Chambers assured that the service will be more widely available as more devices become NFC equipped. 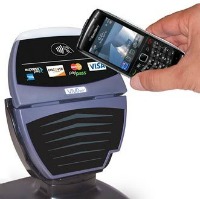 NFC is a technology that  allows for the close range exchange of data between certified devices. By close, we mean really close--devices must be less than four inches away, typically, which is why the two-way-touch method is usually encouraged. NFC has evolved from a similar  technology, RFID (Radio Frequency Identification), which enables EZPass and FastTrack payments, for example. However, whereas RFID only allows for one way transfers, NFC permits data to be sent both ways. Though relatively young, NFC is a very powerful tool within the increasingly mobile realm of e-commerce. According to a Juniper Research report, some 20 countries are expected to launch NFC services in the next 18 months, resulting in transactions approaching $50 billion worldwide by 2014. The US, however,  is behind in NFC implementation compared with the rest of the world.  According to Gartner Research, only 3.5 million phone users are expected to try mobile payments this year, compared to the 100 million international users who have already taken the plunge.

A number of companies are courting the young NearField Communication technology. Google, for example, has been working on its Wallet project for quite some time. Theoretically, Google Wallet could replace the clunky real thing by making your credit cards available on your phone. Google claims to be leading the world in it its next great leap into a new form of currency, which has evolved throughout the centuries from coins to paper to plastic, and presumably now to bits. The Wallet feature will allow you to store your credit card information on your mobile device and scan the information at points of purchase. The tap and charge system will work a lot like the Mastercard Paypass (which uses RFID). Google Wallet will be work only with Citi Mastercard at first, but you will also be able to order a Google Prepaid card that can be funded through any existing credit provider. Google hopes to eventually support all card types, rendering its dream of the fully integrated mobile wallet a reality.

What is the Future of NFC?

Tap and pay transactions are just the tip of the iceberg. Eventually we could see NFC taking over the tasks of transit passes, room keys, library cards...even government ids.

The NFC Forum, an industry association that promotes the use of the technology, sees the capabilities of NFC extending into the realms of “pairing” and “sharing.” Sharing could mean tapping phones with a friend in order to transfer a photo, message, contact, app, etc. Sharing might also mean using NFC to scan QR codes embedded with tiny chips. Similar information could be transferred from an ad without the mobile user needing to snap a picture. The downside of sharing via NFCis that transfer speeds are relatively low, although NFC consumes far less power than Bluetooth and WiFi. However, if you do need to send photos and videos and don’t want to worry about wireless passwords or Bluetooth pairing, NFC may have a fix for that too. Since the technology allows for the super-quick exchange of small sets of data (i.e., settings and passwords), it may enable users to instantly configure higher-capacity connections by simply tapping devices.

Peer-to-peer money transfer isn’t something new for Paypal’s mobile app users. The app has employed Bump technology to allow two users with the Paypal app open to transfer money between accounts. The application registers a “bump” from another device and then sends data into the cloud where a matching algorithm locates the other device and routes the data there. So if Paypal transfers are already available to mobile users, then what’s the big deal about NFC? According to Shimone Samuel, Product Experience Manager for PayPal Mobile, NFC makes the process of peer-to-peer transfer much simpler. “What I’m looking for is what is simplest and easiest for customers and NFC is the simplest way to request money,” he said. There are fewer steps involved for NFC transfers and only one person needs to have the widget open in order to make the transaction. Another advantage of NFC is that it does not rely on a wireless or 3G connection in order to function. Despite these minor advantages, simple peer-to-peer transfers are not the reason why big companies are showing so much interest. The NFC Forum already includes big names like Nokia, Samsung, Sony, Microsoft, Visa, American Express, LGE, AT&T, Motorola, and, of course, Google. Industries understand that the potential uses of NFC far outweigh its current implementation. Though its involvement may seem limited at the moment, it certainly behooves a company like Paypal to be on the bandwagon with these major players, who are all eyeing the potential of NFC to unfold new possibilities for mobile transaction.