So Twitter got Obama on board for a day...big deal. Turntable.fm has attracted the attention of the Mother Monster Lady Gaga, and self proclaimed “mothaf*ckin… 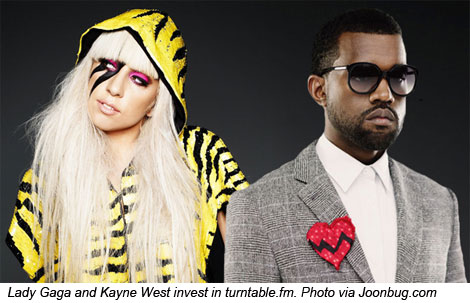 So Twitter got Obama on board for a day...big deal. Turntable.fm has attracted the attention of the Mother Monster Lady Gaga, and self proclaimed “mothaf*ckin monster” Kayne West. Reportedly, these two pop superpowers are contributing to the 7.5 million dollar financing round of investments in what BusinessInsider calls “New York City’s hottest startup.”

This New York City startup was co-founded by Seth Goldstein and Billy Chasen, who pulled a major pivot after the failure of their former startup, Stickybits, a company that  produced mobile-interactive stickers for physical objects. 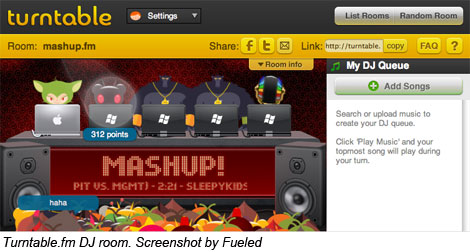 Luckily, Turntable.fm seems to have stuck. Though still in beta, the site has attracted more than 300,000 users, including some of its prominent investors. The site is reminiscent of early chat rooms that gave you an avatar and enabled you to hang out in virtual rooms, castles, etc. The difference is that your avatars don’t just chat with one another, they chat with one another while spinning sweet tunes. There are loads of different genre-based rooms to choose from, each with a handful of DJs on “stage” at one time. You can rate DJs as “Awesome” or “Lame” and he or she may get booted from the stage for losing enough “DJ points.” What makes turntable.fm really cool is the fact that DJs can search for almost any song through the site, and if you can’t find it, it can be easily uploaded from your computer.

Turntable.fm has recently signed licencing agreements with ASCAP and BMI in an effort to legitimize the open streaming of their extensive music collection. There have been rumors that the company plans to update its avatars by allowing high-scoring DJs to superimpose a picture of their actual faces onto the digital creatures. BusinessInsider also reports that the entrepreneurs are planning to develop an innovative iPhone app that will allow several people to DJ a party by requesting and playing songs on one list. This is awesome and turntable.fm investor Charlie O’Donnell concurs. "If Turntable.fm asked me to pay a subscription to take it mobile,” he tweeted, "...I'd do it in a heartbeat."