Coworking Spaces Map, from Made in New York   One the most effective catalysts for innovation is geographical proximity. Proximity, perhaps the driving factor behind…

Coworking Spaces Map, from Made in New York

One the most effective catalysts for innovation is geographical proximity. Proximity, perhaps the driving factor behind the growing surge of startups in New York City — or Silicon Alley — allows an organic exchange of ideas that result in innovation. However, innovation does not only derive exclusively from spatial proximity, but also from spatial redefinition.
With most of the work done at startups revolving around computers and mobile technology, startups offices would seemingly be drone havens. However, these new environments have managed to subvert the dull, cubicle-ridden office space model by adopting a novel approach that has made the office an extension of the creative types that work in them.

This new template for the office is also outperforming traditional models that refuse to evolve. Startups that are housed under one roof are becoming more efficient and growing more quickly than businesses in other industries, like advertising. What sets the two apart, as we’ll explore below, is a combination of visual and psychological stimulation.

At Home with Fueled 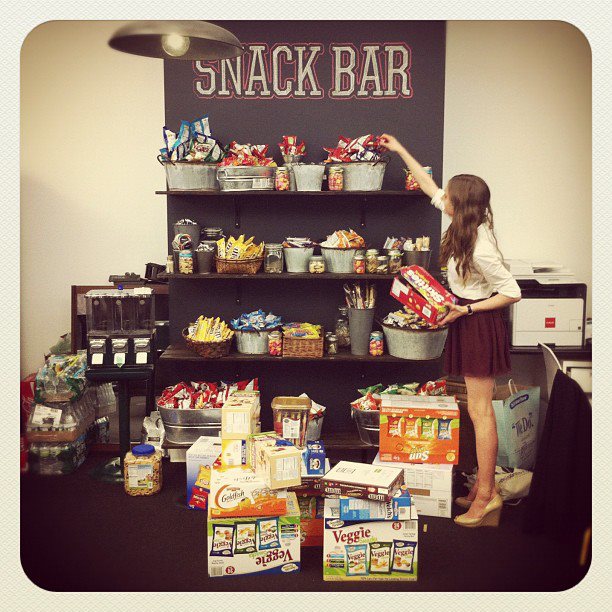 The Fueled Collective, a conglomerate of tech startups that includes Fueled, Fast Society, Klout, Happify, Ribbon, and plenty of others, has embraced a creative environment. The tech startups that have joined the Collective enjoy the benefits of a space that encourages dialogue, a type of tech-focused Socratic method for critical thinking. It is this element that gives spaces like the Fueled Collective a comparative advantage over isolated firms, as no great startup can succeed without a foundation of great ideas.

The Collective is characterized by a balance between design and amenities—an English-styled lounge, themed conference rooms with whiteboard walls, free wifi, ergonomic chairs, as well as an infinitely replenished snack bar, a ping pong table, an ice cream bar, and various other features that emphasize a relaxed and welcoming atmosphere.

To an extent, this approach to the office space can be deeply psychological. At first, an environment like this can be almost unsettling—it does not, after all, follow classic American model of increased assembly-line type productivity to which we've all been conditioned. The feeling of being given the trust to complete a task while having the leeway to take a break for a ping pong match, however, can not only improve the mood of employees but can also motivate people to take the initiatives to more efficiently produce superior quality work.

The benefits of collaborative offices are becoming increasingly recognized. Studio Dror, for example, is creating a 13,000 square foot collaborative space that brings in 200 other creatives under one roof. The venture is notably progressive in its cross-disciplinary nature. While Studio Dror focuses on architectural design, members of the future collective will range from architects, animators, model makers, and video editors. The opportunity for innovative developments is thus broadened across fields.

WeWork Labs, a company that provides a space for  early stage tech startup communities and describes itself as the “physical social network,” is making the trend bicoastal. With labs in San Francisco and New York City, WeWork provides resources like free wifi,  themed events (like Internet Week), and even healthcare for all members, laying the infrastructure for innovation to happen. Similarly, General Assembly, a global network of campuses focused on technology, business, and design, also provides startup tech companies the support to help them accelerate their growth.

As creative fields gain momentum and the market becomes increasingly responsive to such efforts, failing to embrace innovative environments can be just as detrimental to a company as having an outdated product. The advertising field provides an interesting case study for this incident. Advertising has roughly maintained the same business model that has been employed since around the Mad Men era, namely coming up with the “Big Idea,” creating a commercial around it, and complementing the endeavor with a variety of advertisements in a variety of publications (web or print). The concept of telling a story or conveying an idea, as the CCO of AKQA Rei Inamoto suggests, needs to be revolutionized, an act that could easily be done by embracing new technology—supplementing ads with an interactive app or another mobile device friendly option that could increase customer-product interaction.

The takeaway point in evaluating advertising lies in the novel idea that solutions lie in cross-disciplinary efforts. Collaboratives fulfill just that, as they bring parties from multiple fields and specialties together and create a type of symbiotic ecosystem that generate the ideal conditions for innovation. While innovation can often be perceived as an original idea by a single person, the model of a collective points to the contrary.