If you own a camera, surely you’d like to improve on your skills (or lack thereof) as a photographer. Whether using a subcompact that fits… 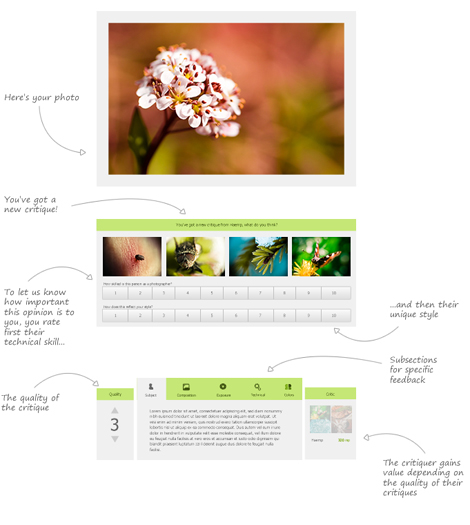 If you own a camera, surely you’d like to improve on your skills (or lack thereof) as a photographer. Whether using a subcompact that fits in your pocket or a highly advanced SLR that looks like a spaceship, just about all of us could use some help. That’s where Photic comes in.  It’s an innovative website, about to launch, that will truly aid its members in becoming better photographers.

There already exist a handful of websites that try to do this, but judging by its credo, Photic should be the most effective to date. Most popular of the bunch at this moment has to be Yahoo’s Flickr. On Flickr, people can upload photos at will to be exposed to over 60 million photographers who then comment on the owner’s work. That sounds like a great way to get your name out to the masses and hear the comments you need to improve. But if you agree with that thought, according to Photic, you’re simply wrong.  As Photic explains on their site, “We think that one comment from a mentor or photographer you respect is worth much more than a thousand comments from random people”.

Flickr falls right into the category of websites that offer nothing but mostly meaningless comments in forums made up of amateurs who think they know more than they do. On the other hand, Photic boasts the support of constructive criticism, mentorship, and specific feedback. Upon receiving new critiques, photographers can rate their critics based on the quality of their comments.  Furthermore, comments are grouped into specified subsections that let photographers know exactly what the mentor is looking at. In a similar manner to Eight Spots, which recommends food and drink locations based on taste, members can select the photographers whose opinions they value most. This process filters out the judgments of people you don’t respect or find useless. In all fairness, Flickr’s privacy settings allow users to pick who can see their photos, but the majority of the 60 million members don’t do it. The main objective of being a part of Photic is to hone your skills as a photographer, a surprisingly novel service.

There are some questions to be asked of Photic though, and some potential flaws. The first thing that comes to mind is that it may be too easy to engage in “selective hearing,” members preferring to hear only praise as opposed to the more valuable constructive criticism. It’d be difficult to assess, but Photic could benefit from creating some sort of system for choosing only the best photographers to be mentors. Then they could comment anonymously so as to avoid selective hearing. At the same time, what’s in it for the critics other than the intrinsic value of mentorship?  It could serve to add to their notoriety, but the site still functions mainly to help amateurs.

Since the site has still yet to launch, Photic promises more features to come before opening up shop. Hopefully they put at least some effort into to avoiding these potential pitfalls. Regardless, Photic is a great idea that may very well elevate the picture-taking world to new heights.