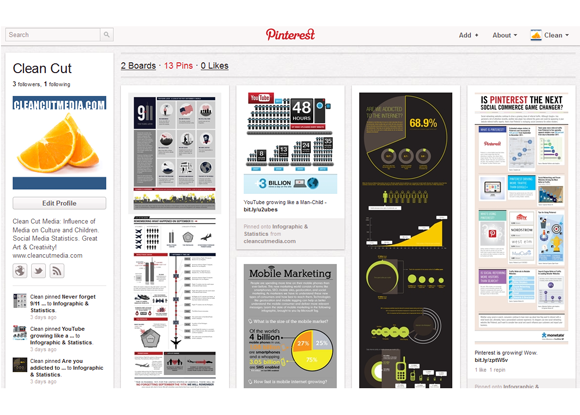 Social media’s pervasive touch gives individuals numerous ways to share information. Between Facebook, LinkedIn, Google+, and Twitter, users get constant updates on their contacts’ interests and activities. But social media lags in terms of promoting safe visual media sharing with people outside of your friend zone. Meet Pinterest: one of the hottest social media websites and the best way to share photos you have taken or found with everyone out there in the world.

Pinterest is genuinely new: it provides an easy-to-use, intuitive way to share images and it lets users share them with everyone. Previously, sharing visual media was much more difficult than sharing information or updates. Photos on Facebook or Twitter often look small and too many of them will make your whole profile appear crowded and messy. More important, other social media is geared at letting you share your social media with your friends for personal reasons.  Pinterest is different: it is about sharing images that interest you with strangers who may share your taste.  It’s a new form of social media sharing, one that is safe, artistic, visual, and impersonal, which explains its instant appeal to a large demographic of web users.

The site appeals to a very large set of users but it has targeted a narrower demographic than most existing social media: 97-percent of Pinterest’s Facebook fans are women. But, considering it appeals to a wide demographic range of women, that is not much of a limitation and the site has taken off since its inception.  It has already reached the 10 million unique visitors per month mark and continues to grow exponentially.

Pinterest will survive because it offers a totally different model for social media engagement.  It’s not “look at me,” it’s “look at this,” which appeals to web users who want an outlet to share visual ideas that may not be directly connected to their own lives. In its own way, Pinterest is a reaction against the constant personal crowing of social media, a rebellion against the non-stop endless influx of personal information about the individuals in our lives.  Because it is very simple to use – users simply join the community, upload content, and share it – and it lacks the overused ‘personal touch’ of Facebook and Twitter, it is unique and should have staying power in the social media world.