Quarterly Co. and the Age of Culture Curation 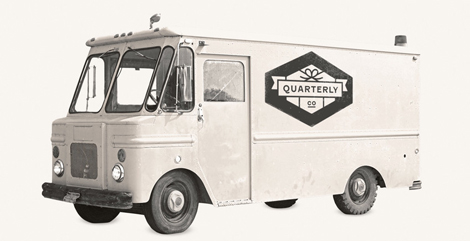 In 2009, Tumblr, the micro-blogging service, celebrated 250 million page views over the course of the year. Now, two years later, over the course of a single month, the service sees upwards of 7 billion views - and continues to grow exponentially, with 8 billion views expected to be the norm in the near future. There are brood implications, of course, pertaining to the rapid consumption allowed by the image-heavy feeds, to the strength of social-integration upon which the service is rooted, to the resilience of a brand once beleaguered by constant crashes and downtime.
But there is, perhaps, something more to be said about the growing strength of culture curation. The Internet’s early adopters saw blogging as a form of melodramatic self-expression, with sites like LiveJournal and Xanga reading most often like highly-personal diaries. A Tumblr feed, alongside the rapidly growing "online pinboard" Pinterest, reads like a universal publication, rich with the color of magazine clippings, high design, and optimistic reviews of nearly-inaccessible products. Often, the images on sites like Tumblr and Pinterest are pulled from cultural diaries like Cool Hunting, Hypebeast, or Co.Design, which curate the vast landscape of high design and production then place it in the hands of readers.

There’s a certain amount of dissatisfaction that comes with this sort of idolization, though, which is where Quarterly Co., founded by Zach Frechette, comes into play. Rather than curate content for you to see but not feel, Quarterly Co. bridges the gap between you and your preferred tastemakers by offering a pre-paid service through which physical products, selected by influential curators, are mailed to subscribers on a quarterly basis. Unlike sites like Gilt and JackThreads - tastemakers in the sense that they offer a precise selection of products to a specific demographic for a set period and price - Quarterly Co. bills itself as a learning service, sending products with explanations of their significance according to the individual each subscriber already admires.

Subscriptions, marked at a surprisingly-low $25 per quarter, are specialized, allowing the service to provide a wide range of options to users who want to select individual influences. Impressively, the selection seems to be subject to careful curation itself, not always based on publicly-noteworthy names, but instead, niche specialists: Josh Rubin and Evan Orensten of Cool Hunting; Scott Belsky of Behance; writer Joshua Foer; even Rhode Island School of Design President John Maeda. In addition to the opportunity to reach their followers in a highly-personal manner, this varied collection of writers, scholars, designers, and innovators receive a portion of the subscription fee.

As Quarterly Co. notes, “Consumption isn’t inherently bad, it’s just a matter of making smarter choices about the things we surround ourselves with.” Like a broad range of platforms and sites - from Foursquare to Trippy to Snapr - Quarterly Co. is bridging the gap between our technology and our day-to-day lives, focusing on the way our online habits can influence our behavior. Quarterly Co., in a unique way, is not directing us to new environments but shaping our own according to those who influence it in the first place. And it’s doing so with little demand on our end - a single call-to-action has finally replaced the read-find-buy process of blog shopping. Protractors may argue, of course, that the removal of choice makes the process all too easy, condensing influence into the hands of an empowered few, but they’d have to do so while pretending this isn’t already the case.