Iran is attempting to do the impossible - shut down the Internet. Dun dun dun. On March 2, Iran held parliamentary elections, with the country’s government…

Iran is attempting to do the impossible - shut down the Internet. Dun dun dun.
On March 2, Iran held parliamentary elections, with the country’s government trying to prevent a repeat of the widespread demonstrations that followed the disputed presidential election of 2009. Part of this effort was a renewed clampdown on Internet access, which was a wake-up call for anti-censorship activists.
The country is second only to Israel for the percentage of the population with Internet access in the Middle East, but strict moral values and a watchful eye over access to dissent or criticism means that around 27% of all sites are blocked. Iran has long heavily censored the Internet, blocking access to international news sites and forums for dissidents. Earlier this year the country came down even harder on Internet use, blocking access to any SSL-encrypted website. This measure makes it harder to use some censorship circumvention tools, but the regime’s main goal may just have been to cut off access to webmail services that were widely used to exchange information without any obvious traces.

Currently, the US State Department is trying their utmost to poke some holes in this electronic curtain by connecting with average Iranian through an extensive digital outreach program and helping Iran to develop fresh tools to help Iranians stay connected to the Internet, even as the government finds new ways to block access.
The US insists that the Iranian people, like all peoples, have a “universal right to access information” and to “freely assemble online.” However, the Iranian administration seems have no problem ignoring these rights, stating that many of the blocked websites conflict with Iran’s moral code. Unsurprisingly, blocked websites include adult sites but also art and up to 32% of all news sites, including BBC News, The Guardian, Fox News, The Huffington Postand the New York Post. Interestingly enough, CNN, Reuters, The New York Times, and Bloomberg are still accessible, although people say not for long. 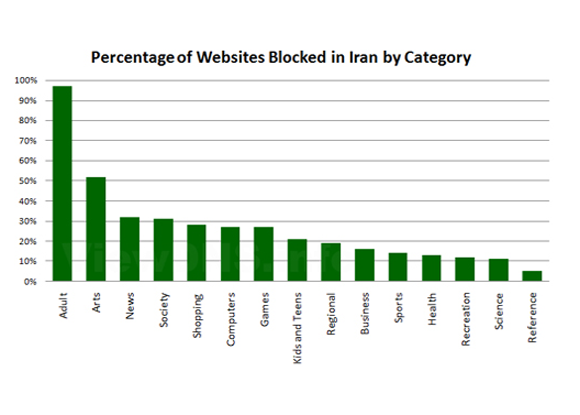 Another hugely practical reason Iran can’t just shut down the Internet is that a large part of their economic infrastructure is digital, and, as such, a shutdown of any sort would lead to a financial loss of millions. However, Iran is said to be working on building a domestic Iran-only Internet, a halal network if you will, that will allow digital communication within the country while blocking outside access for an estimated 30 million Iranians.
Activists are also on the scene, trying desperately to stay a step ahead of the government. One group called the Tor project says it has around 480,000 daily users in Iran. Usage went down significantly when Iran enacted its new censorship measures a few weeks ago, but it has since recovered. Activists involved in the Tor project as well as other anti-censorship initiatives now want to make sure that access remains available in the coming days. A key part of these efforts is a software called Obfsproxy that obscures any Tor traffic.

While the work the US is trying to do for Iran is indubitably admirable, it seems ironic that the administration is choosing to look outwards before fixing some internal problems, such as SOPA and ACTA. Iran inarguably has some major issues to deal with, but the US seems, in some ways, far too warm and comfortable under its very own, extra thick electronic blanket.