The beverages stocked, the pizza delivered, a symphony of keystrokes and mouse clicks begin to fill the room. This. is. Hackathon.   On July 30th… 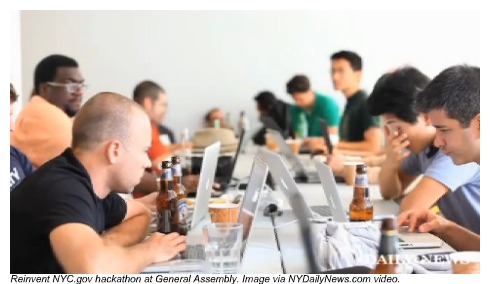 The beverages stocked, the pizza delivered, a symphony of keystrokes and mouse clicks begin to fill the room. This. is. Hackathon.

On July 30th and 31st, 75 developers from all over North America converged and set to the task of redesigning the NYC.gov website. Mayor Bloomerberg announced on July 14th that this first ever New York City sponsored digital programming event would be held at General Assembly, a Manhattan space for start-up designers and developers and home to yours truly, Fueled.

commented General Assembly co-founder Matthew O. Brimer. According to Mashable, the NYC.gov website, which first launched in 1996, has not been redesigned at all for five years (which, in tech years, is like 50). The city’s “virtual face,” as Department of Information Technology and Telecommunications (DoITT) Commissioner Carole Post puts it, is long overdue for a lift.

The New York City government  provided the hackers with traffic analytics to illustrate current usage and promote the development of a “more human centered, search-driven experience.” The City’s technology partners, which include big names such as Google and Facebook, also provided hackers with access to their APIs (application programming interfaces). Participants were not, however, offered any guarantees as to the future use of their designs.

At the end of a grueling 36 hours, the hackers emerged from a coding stupor with their prototype web pages. The designs were judged by a panel of which included members of General Assembly, city government, and New York City’s startup community. The winning designs, utilize a Google-esque browser format which simplifies the search process for users looking to find information rather than be fed lists of navigation links. See below for screen shots of the winning designs: