Integration with social networks is, by now, an expected perk of photography apps, with the ability to share work across platforms a component of almost… 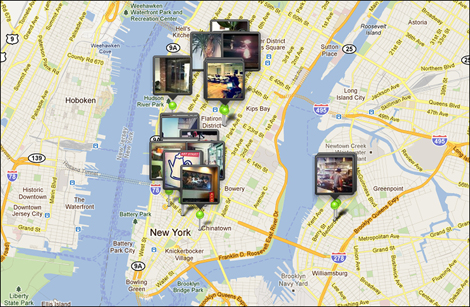 Integration with social networks is, by now, an expected perk of photography apps, with the ability to share work across platforms a component of almost any download. Facebook and Twitter feeds are rich with the color of filters included in the market’s more heavily-downloaded offerings - particularly Instagram and the aptly-titled Hipstamatic - and even the most thoroughly-tauted startups, like Color, have been forced to address user loneliness in the absence of external - or at least easy-to-use internal - social opportunity.

Differentiation, in this particular vein of the industry, is evidently difficult, especially with some apps already boasting a stranglehold on the market. Snapr, though, launched in 2010 by Edward Talbot and Rowan Wernham, features interaction of a different sort: real-time geotagging appended to a shared map. Whereas a Tweeted Instagram photo may list a location, Snapr pegs the image to that location for a shared visual experience, allowing users to scan their neighborhoods and immerse themselves in clusters of documented real-time activity. View images - filtered, if necessary, by tag, user, or city - of the action in a crowded stadium as an event takes place within, or simply track your friends’ nightly forages through views of their haunts. These images can be revisited and sorted by date as well as to create a cooperative visual diary. “We have always had a strong focus on location, and we have a map that brings people’s photos together by place and time,” Wernham said. “Because the photos are sorted by time, if I go back and view one of my old shots - say from SXSW in 2010 - then it’s kind of like I have been transported right back, because I see other people’s photos from that time, too.” The posted photos, particularly those from heavily-crowded areas, form a thick cloud on the map above a given locale, the contents of which can be quickly devoured.

Of course, the app - available for Apple iOS and online - has a social component of its own that allows users to follow and comment on one another’s work, and it connects to Facebook, Twitter, Tumblr, and Foursquare. “We have found a nice balance where you can have your feed with maybe hundreds of people that you follow, and then also have five to six of your current best friends where you don't want to miss anything they post,” Wernham said. “We are also trying to find interesting ways to showcase good photographers and bring popular content into the foreground, such as our cities page that shows the top ten photos in major cities for each week over the last month.” In early 2011, with this in mind, Snapr opened an API to expand this network by allowing competitors to utilize the brand’s features as their own. Now sharing capabilities, photo streams, and mapping can be harnessed by Instagram, Hipstamatic, and others in a self-serving manner that will, in turn, enrich Snapr’s interface. Rather than undermine opponents - a potentially costly venture - the team at Snapr has made thorough use of their content. “I think ultimately people want good social features and a way to see what other people are doing with these photo sharing apps, but no one wants to join a new network for every app, and existing services like Facebook, etc., aren't always the right platform for sharing a constant stream of photos,” Wernham explained. “We would love for Snapr to become a hub for all sorts of social photo-sharing activity, and we would like to do that in a way that accommodates content from lots of different apps.”

Snapr’s lure, for the time being, is the steady stream of updates spread across a map on a user’s phone or computer, a service expected to better itself as outside developers take advantage. This expansion, Wernham said, is their current focus. “Our next major release will be all about the developer platform - streamlining the process of building apps and providing lots of resources for developers,” he explained. “We hope to provide tools for people to create their own niche apps around location social photo-sharing. That brings value to the Snapr ecosystem as a whole, and also allows people to create their own areas of value.” The opportunity to share photos in one way or another is nothing new, but the API-move seems a conscious maneuver to appropriate content in a way users haven’t seen before. As of early September, four additional apps - iSupr8, BadgePlz, Snapfinch, and GeoDiary 2 - have made video and customization features of Snapr, demonstrating the app’s growing potential from both a technological and marketing standpoint. A thorough update just under its belt, Snapr seems poised to redefine not just its own network but that of its competition as well.