It’s difficult to determine whether 16-year-old programmer Nick D’Aloisio or his product, Summly Limited, has garnered more hype over the last several days. The whiz… 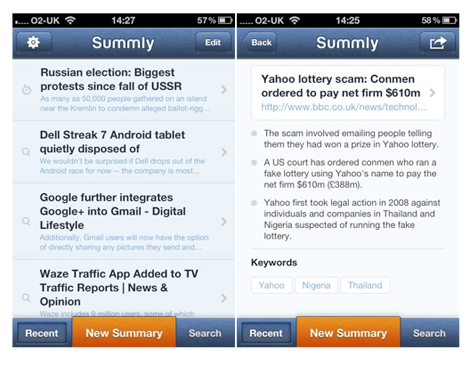 It’s difficult to determine whether 16-year-old programmer Nick D’Aloisio or his product, Summly Limited, has garnered more hype over the last several days. The whiz kid, as he’s bound to be labeled, has developed a product that summarizes web content as to allow readers to determine its relevance to their search. In doing so, he’s been awarded $250,000 in seed funding from billionaire Li Ka-shing’s investment vehicle Horizons Ventures.

The product, formerly known as Trimit, was originally conceived as a service that summarized text into chunks in order to allow readers to share that content over SMS, email, and social networks. In essence, the idea was a unique one, in that it moved beyond allowing users to share content - as Google+, Skmmr, and a range of other services already allow - but to do so in digestible chunks.

With a name change and a high profile investor, the product seems to be moving in a more promising direction - with new competition. Summly is now a tool that, in essence, provides a summary of content on both sites and in search results. In doing so, it enters competition with the likes of Google Reader and news aggregation services. But Summly, to much relief, is an SEO-dodger, using a unique algorithm to step beyond headlines in order to determine whether a site or story’s content is actually relevant.

D’Aloisio developed his algorithm by studying the summation habits of human beings, who, averse to automated keyword summation services, consciously ignore most keywords to address the overall content of an article. Summly, using this method, extracts text using HTML processing, then analyzes it and sends it back out in the form of bullet points, Tweet-length blurbs, or full paragraphs. Researchers at MIT have found that this method is 30-percent more accurate than existing algorithms, and users have found that it functions smoothly as an app while simultaneously simplifying existing services, like Google searches.

The hope, in the long run, is that humanizing the process of summarizing content will allow for the faster consumption and sharing of information on the web, despite constant concern that the Internet and social networks are effectively destroying our last remaining shreds of patience. Summly, though, in allowing three levels of summation - 1,000 words, 500 words, or 144 words - seems more concerned with speeding our progress from the initial search to the discovery of relevant content. From there, it’s up to the users to decide how much of it is really worth their time.