The Golden Age of Subway Fights

These were all pretty nuts, but they weren’t so crazy that I thought that I’d never see something crazier 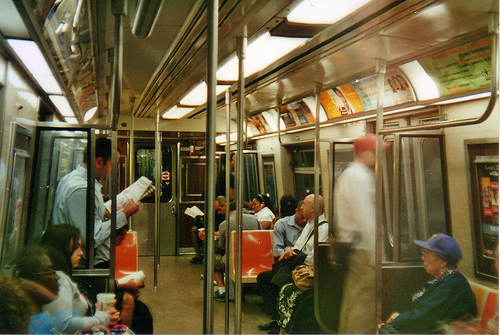 The proliferation of smartphones has permanently changed the way we experience the world and interact with one another. We can do things with a device in the palm of our hand that seemed unlikely only a few years ago, if not inconceivable  to previous generations. It would take days to list all of the amazing things that can be done with smartphones. Our culture and society as a whole has truly progressed from this amazing, amazing invention. And most importantly, we can totally watch subway fights.

With smartphones, people on the subway can record the crazy things that happen on a daily basis in the undergrounds of the Big Apple. And the world can benefit. Here’s a few top moments, measured on the Mike Tyson scale of craziness.

Disclaimer: Most of these videos have language that are NSFW. Numbers 3 and 5 are EXTREMELY NSFW.

Two women get into a fight over a woman eating pasta. Spaghetti is lost. A nation mourns. The footage for this one is a little grainy. (Pun!) Tyson-Meter of Craziness: 6/10

We’re gonna call this one ‘The Hockey Fight’, because, just as in hockey, two heavyweights kept squaring off and throwing some punches, but when they went to the ground, the ‘referees’ split them up. But they kept getting up. And going down. If the Spaghetti Fight was ‘The Shining’ of fights, with a big suspenseful buildup for the eventual release, this one’s a ‘Saw’ movie. Just lots of gratuitous fighting. To each his own. Tyson Meter of Craziness: 8/10

This one doesn’t qualify as an actual fight, but just a total freak out. Every bit as entertaining. Tyson Meter of Craziness: 9/10

Here’s another one where no punches were thrown, but the fight was enjoyable nonetheless. Two ladies (and I use that term lightly) get into a fight over a baby sitting in an actual seat and not on a parent’s lap. My favorite moment? During the fight, one woman says “This is America. I can say whatever I want.” Clearly what Adams, Jefferson and Franklin had in mind on that hot day in Philly. Tyson Meter of Craziness: 6/10

Now this is what I’m talking about! Two women get into a verbal fight, the woman with a stroller sprays pepper spray into the other one’s face, and it. is. on. The stroller somehow gets pushed out of the subway car at the stop, and it seems that some of the passengers, thankfully, take care of the baby. This was a hair-yanking, curses-flying mess. And I loved every second of it. Well done. Tyson Meter of Craziness: 9/10

We have not yet seen a 10 out of 10 on the crazy meter. These were all pretty nuts, but they weren’t so crazy that I thought that I’d never see something crazier. The unknown 10/10 is still out there. If you see a great fight in person or on Youtube, send it over to [email protected] , and maybe we’ll post it on Fueled. With this smartphone generation, the fights are out there. It’s up to us to find them. I hope we’re up to the task, world.