Tech and the City: the Rise of Silicon Alley

Over the last five years, New York City has become a hotbed of innovation. The city has seen a great increase in the presence of…

Over the last five years, New York City has become a hotbed of innovation. The city has seen a great increase in the presence of technology startups, competing alongside the long established Silicon Valley and surpassing other key locations, like Boston. While the general job sector growth rate in New York has been sluggish, the tech sector saw a 60-percent job increase rate, rising from 33,000 to 52,900 jobs from 2003 to 2012. This incredible turnabout has swayed many startup companies to plant roots in New York City, where proximity to other startups has bred a sense of camaraderie and innovation.

New York now houses the second-largest concentration of startups after Silicon Valley, diversifying the economy of a historically Wall Street-dependent city. Approximately 486 startups have received funding from angels, venture capital firms, and other private investors. This, however, does not take into account non-funded startups, which could put that number in the thousands. While most of these startups remain relatively small, many of them have achieved stardom, including Gilt Groupe, Tumblr, Foursquare, Etsy, ideeli, and ZocDoc. In the last five years, 15 startups have raised more than $50 million in investments, 27 have investments of at least $25 million, and 81 have raised at least $1 million, according to a report by the Center for an Urban Future.

Not only are there a greater number of startups based in New York, but many magnates of Silicon Valley are setting up sister bases here as well. Joining Google — who purchased a building complex for $1.8 billion — are the likes of eBay, Twitter, LinkedIn, and Facebook, which is establishing an engineering camp near Grand Central Station.

Tracking the percent growth of venture capital deals by region, New York was the only region that saw a jump in startup investment, with Silicon Valley experiencing a 10-percent decrease and the US an 11-percent total decrease. Interestingly, while Silicon Valley still remains the leader in sheer number, New York has overtaken it in niche subgroups, like fashion tech, ad tech, digital media, and health tech. The city has thus been able to take industries in which it already excelled and apply existing technologies to revolutionize the consumer experience. 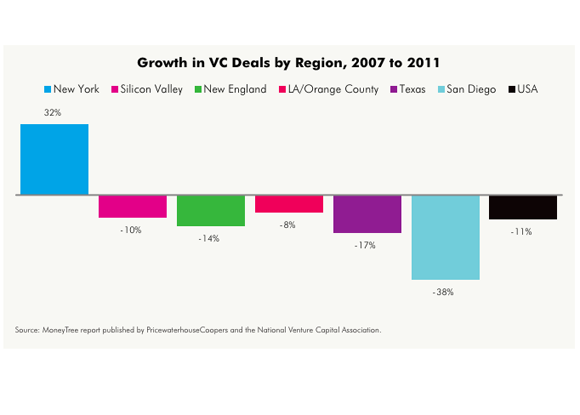 The implications of startups are ever increasing, not only in relation to technological innovation and a growing number of consumers, but also in pushing the US out of its economic recession and increasing global interconnectivity. In the US, IT was the only job sector that saw a dramatic expansion with a 28.7-percent jump. As a result, the city has become an incubator for innovation, with 30-percent of startup founders moving to the city and a growing number of business school graduates choosing the tech startup industry over finance, the long-time favorite.

The Angels of the Next Generation

Unlike the dot-com bubble, the startup culture does not seem like a temporary blip. Five years ago, it was especially difficult to acquire funding for a startup, particularly during its early phases. Today, however, systems like angel investors—affluent startup investors that provide capital in exchange for convertible debt or ownership equity—and venture capitalists have formed firms like New York City Angels that regularly fund startups during their seed-stage.

At the same time, it is really the ecosystem of startups that has really catalyzed the industry, as a growing community of like-minded entrepreneurs has been able to thrive through interaction and conversation. Events like hackathons, startup weekends, and dozens of other tech-related organizations provide the infrastructure for innovation to happen. Additionally, successful startup founders are now serving as angel investors in nascent startups while also taking the role of mentors, providing advice during a critical period of business development. New York City has thereby managed to establish itself as a breeding ground for technological development, overriding past centers and attracting an increasingly large number of investors. The city is now set for the next generation of technological innovation.