The CitySourced Upgrade is an Upgrade for Your Neighborhood

As mentioned recently in Fueled, there is finally an app that exists for community good. As opposed to going through the relatively long process of…

As mentioned recently in Fueled, there is finally an app that exists for community good. As opposed to going through the relatively long process of making a 311 report to announce public issues, you can now go to straight to your CitySourced app, free to download and available for Android, Blackberry, iPhone, and Windows Phone 7. Issues like vandalism, public safety, environmental problems such as illegal dumping, or any other conflicting dilemma that decides to creep on you unexpectedly, or far too frequently, can be instantly reported and armed with video, photo, or audio evidence. The report is submitted directly to your local city hall and appropriated thereafter to the most applicable department.

The app has received some negative reviews, mostly in the way of an inconveniently long loading time, but CitySourced has just released a newer version of it's app over a month ago that has addressed these reviews and turned them into constructive criticism. According to Andrew K. Kirk, account manager at CitySourced, "The entire app received an entire new upgrade under the hood, making CitySourced faster and more stable. In this revision we included many new features, many of which were in direct response to customer input.” These features include upgraded media functionality, the ability to further specify location, and engage in offline workflow, among other issues. 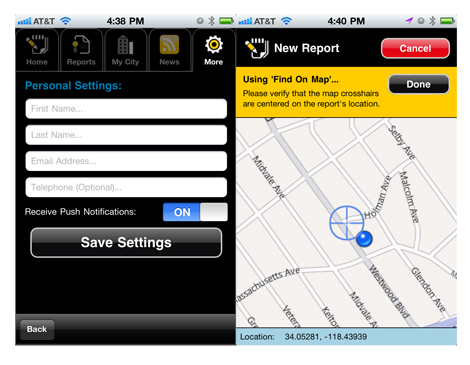 Because of these changes, you can now have more control over your report and be assured that it will not be lost in thin air. Every complaint is automatically assigned a ticket number, and the progress on the report is updated by the city staff in your area. It can also be checked retroactively. Your report automatically joins a pool of other complaints that have already been accrued for your specific area, and collective comments are also allowed. This is a great opportunity to see how the blending of government and technology can save time and money in addition to strengthening accountability to the citizens they govern.

CitySourced is not only a highly productive and fast way to feel part of efforts to keep one's community safe and clean, but also a convenient way to inspect the conditions of a neighborhood you may be planning to move to. The amount of reports a specific area has is completely transparent and is indicated by red marks which are viewable on the digital map provided on the app. Just look up your county, city, neighborhood, or zip code and brace yourself for the lowdown.

Responding to a complaint about the infamous art of graffiti is not the greatest use of time or attention on behalf of the police force, so using CitySourced is the best option for making sure it is acknowledged and followed by local state authorities. Another great aspect of the app is that you can submit a report with your name and contact information or anonymously. As a member of the CitySourced community you can now expect to be alerted on issues that occur in your local area by means of push notification. Keep the reviews flowing, CitySourced is clearly thriving on them and making user-experience more smooth.

Published by Ivy Herrera on July 8, 2022.
Previous post Can Luluvise Segregate the Social Market? ← December 13, 2011 Next post → Through Pokki, All Developers Have the Power to Grow December 13, 2011