Time to Link In?

Earlier in March, social network LinkedIn posted this infographic to announce its passing 100 million individual profiles. Leena Rao for TechCrunch reports that as of July 2011, the site has surpassed MySpace in number of unique U.S. visitors, making it the 2nd social network in the nation. According to Rao, LinkedIn “reached an all-time high of 33.9 million unique visitors in June compared to Myspace, which saw 33.5 million unique visitors (that’s down from 34.9 million in May).” TechCrunch uses the following graph provided by Comscore that shows visitor trends for LinkedIn, Facebook, MySpace, Twitter, and Tumblr. 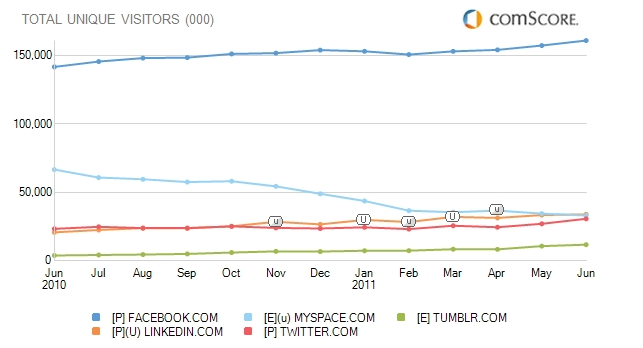 LinkedIn differs from other social networks in that it emphasizes business and professional connections and appeals to a different crowd. According to Ethan Bloch on Flowtown, the average LinkedIn user is 44, as opposed to 31 for MySpace and 38 for Facebook. 58.9% of LinkedIn users are male compared to 51.2% on Facebook. LinkedIn’s professional features are comprehensive and allow users to market themselves to potential employers. Since its inception in 2003, LinkedIn has made a number of changes to optimize their profiling capabilities including: an option to sync creative portfolios, a job application button,  and a resume builder. In addition, LinkedIn and Twitter conducted major sync-ups in order to enhance the connectivity between the two.

As social media and networking platforms merge and connect more than ever before, it might be a good time to get LinkedIn. After all, your next job opportunity could come from your neighbor or that college friend whom you forgot. LinkedIn gives us a chance to remember and visualize all of our connections as well as make new ones.