Our Top 10 Sites For Design Inspiration

Design inspiration at Fueled this week: a handful of films, a couple innovative design agencies, and one super talented Fleming.

Every week at Fueled, our London-based lead designer Rob Palmer shares a handful of inspirational websites with our teams in New York and Chicago. This weekly email acts like a virtual water cooler, encouraging us to congregate across time zones and discuss what brands and blogs are doing to push new trends in web design.

This week, we have a handful of films, a couple innovative design agencies, and one super talented Fleming. We're traveling from Wellington to Antwerp, Silicon Valley to Tampa, featuring the fictional and the super natural with a dose of teen angst.

Here are our picks for this week's design inspiration.

The marketing team behind the next X-Men movie, "X-Men: Days of Future Past" are having fun with fans of the franchise. The company has released many teasers including this website for the fictional Trask Industries. The movie, which isn't released until May of next year, follows Larry Trask, billionaire leader of Trask Industries, as he builds an army of robots to exterminate the X Men. The website is smartly designed, especially considering it's for a fake company. While you're at it, be sure to check out the Trask Industries commercial. 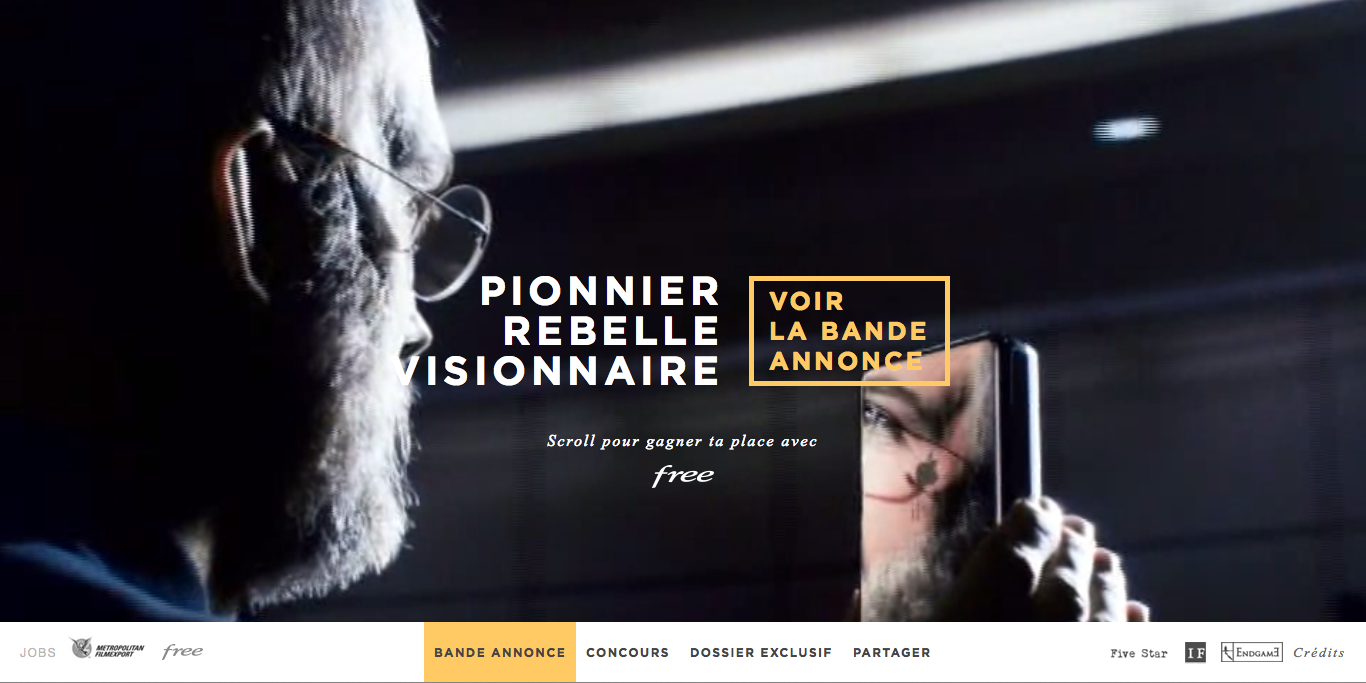 This site, for the Steve Job bio-pic, "Jobs", is a handsome ode to the former head of Apple. You'll notice we picked the site for the French theatrical release of the film, and not the American version. The American site pales in comparison while this site lands on a Warholesque image of Jobs. Scroll down to explore different images and clips from the film. Although it's no Apple product, it's a smart design. If only they got Daniel Day-Lewis to play the tech giant and not... Ashton Kutcher. 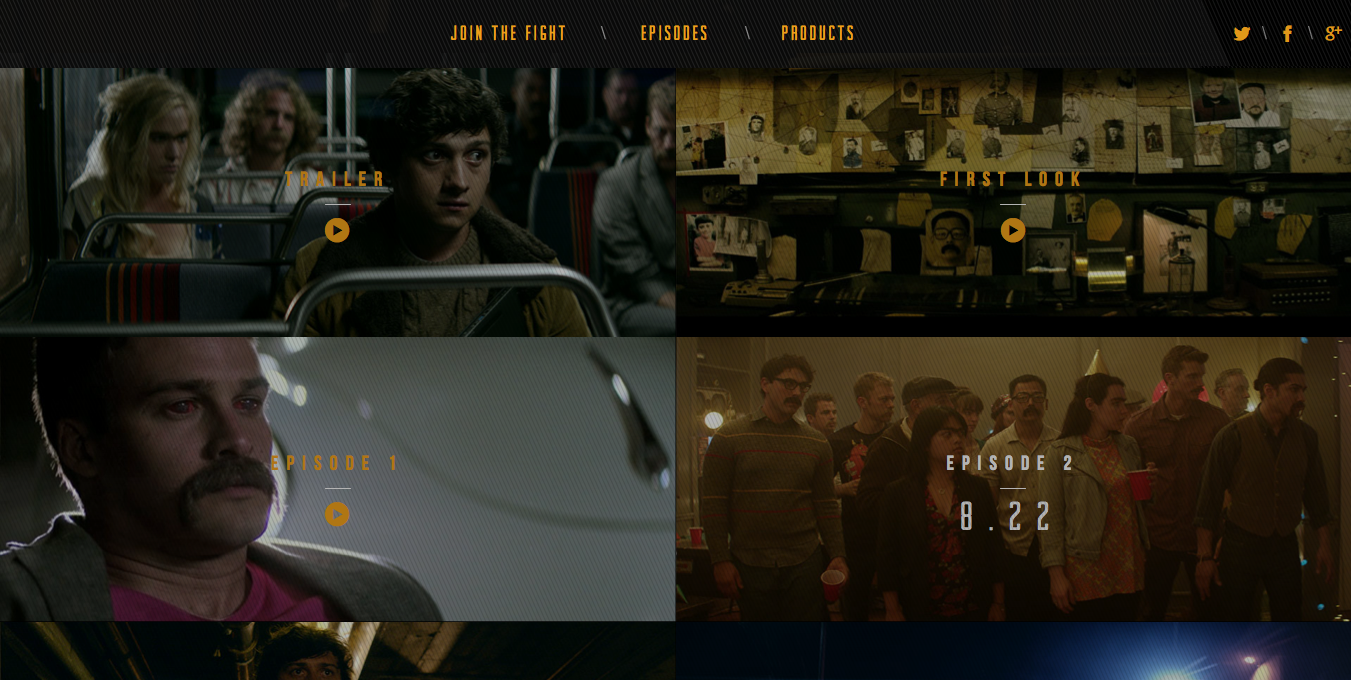 Facial hair is on the loose and not just in Clapton or Williamsburg. "The Power Inside" is Intel and Toshiba's third 'social movie'. Mustachioed aliens land on earth to destroy the human race. Followers pledge alliances through social media outlets to determine the outcome. Full screen video is set behind information about the film and the aliens. Similar to the "Jobs" website above, scrolling through the site gives you access to episodes and options to follow the adventure. 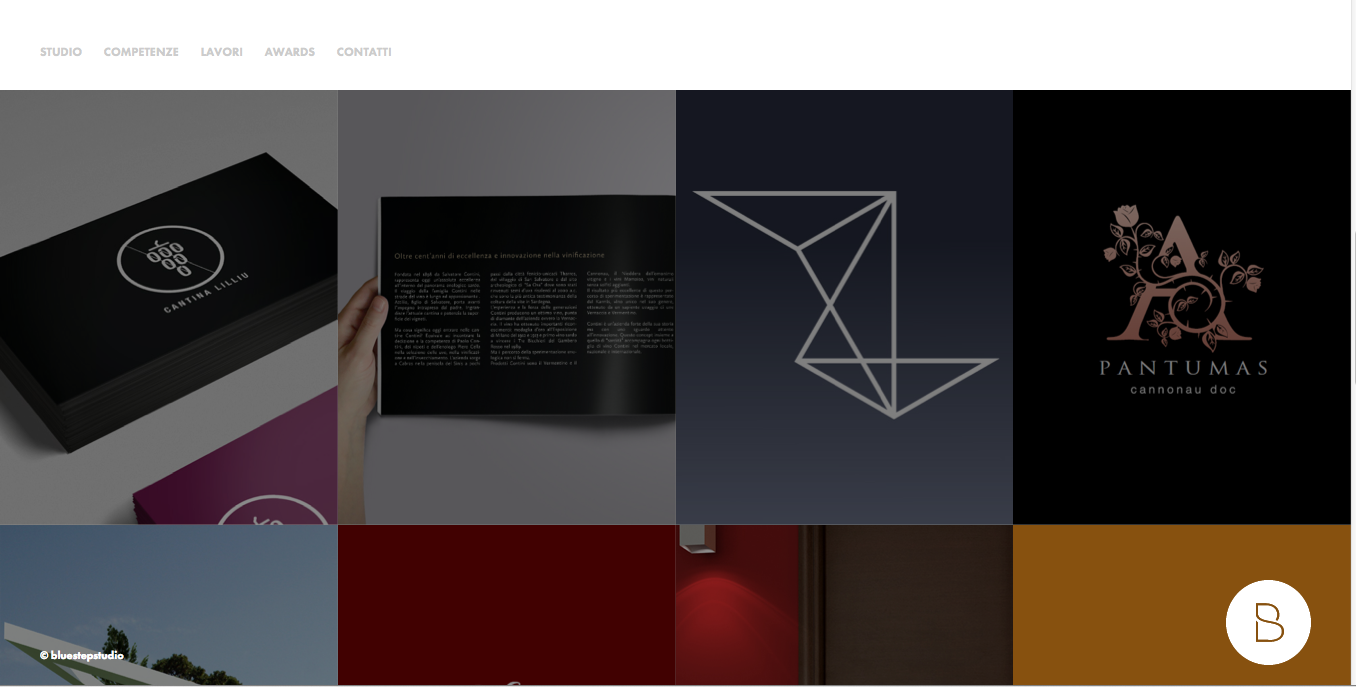 This online photography portfolio for Blue Step Studios is stunning and inspiring. The site is packed with their work from stunning shots of products and from charities to designer jeans. We love how Blue Step Studio uses photography to help accomplish beautiful online branding and web design. 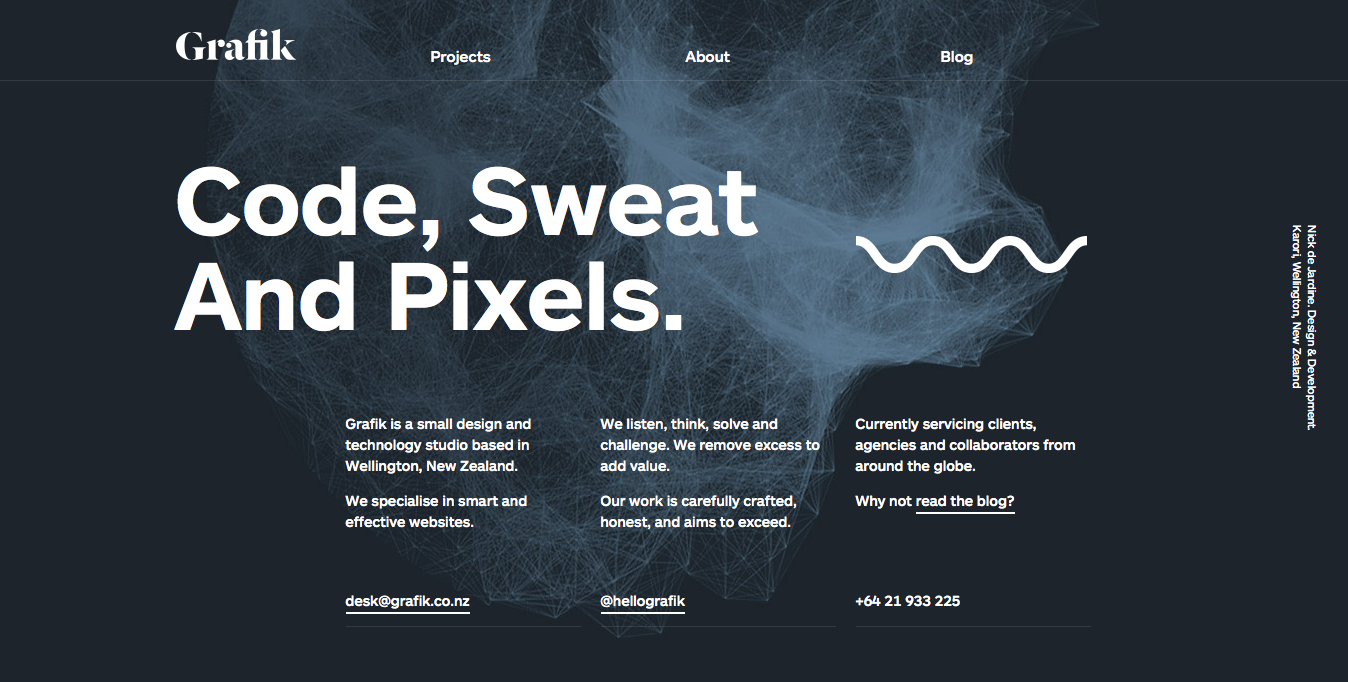 Grafik is a company based in Wellington, New Zealand focused solely on web design, a skill that speaks for itself with their straightforward website that's cleverly designed with clean transitions and sharp imagery.

Brave People bills itself as "An Agency for the Detailed' and it shows. The company's website is awesome and features some beautiful and detailed case studies on branding, interactive design, print and photography. Don't let the Tampa, Florida address fool you, Brave People produces some seriously cool designs. 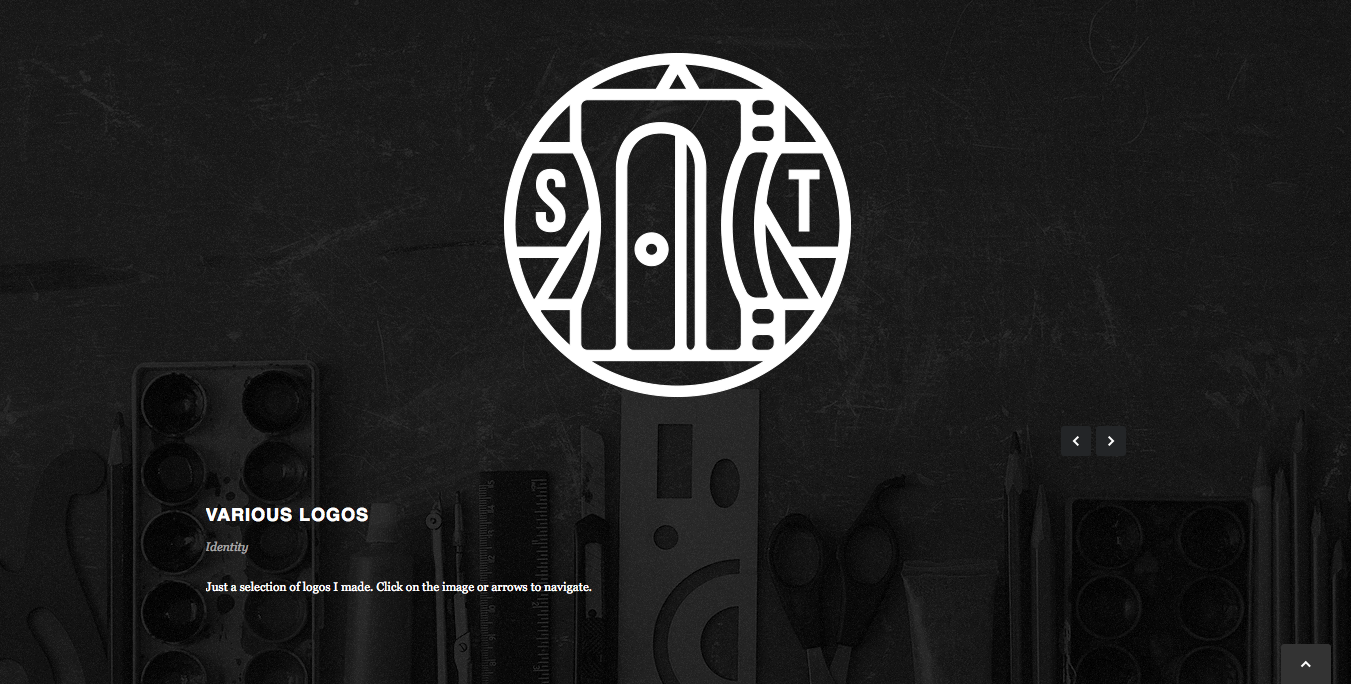 Gravual is the online portfolio of 22 year old Sander Legrand. Based in Antwerp, Sander doesn't have any huge clients... yet. His website is mostly small personal projects like shirts, christmas cards, and posters but he's incredibly talented and the website is slick.

The Kings of Summer 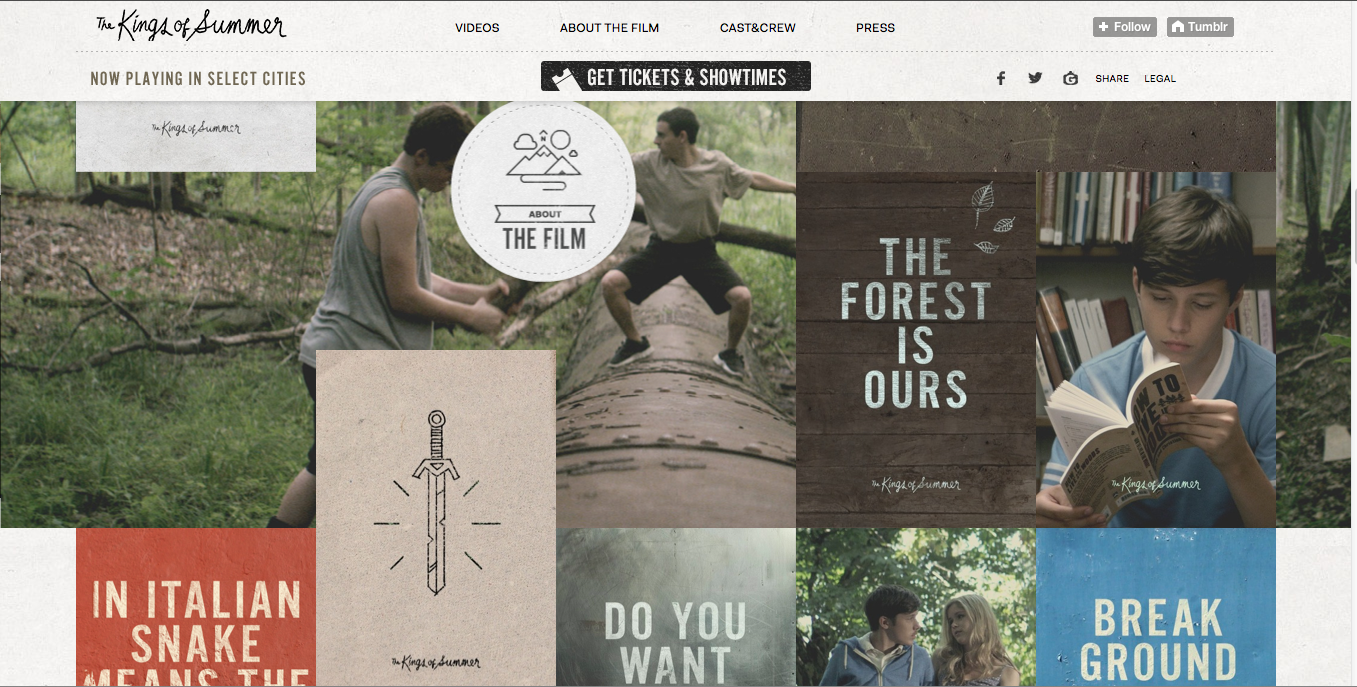 This site for the film "The Kings of Summer" is playful and remarkably interactive. The movie tells the tale of three boys who escape to a custom built cabin in the woods away from their clueless, embarrassing parents. The site is one page comprised of tiles featuring .gifs, quotes from the film, and information about the movie. It's all presented in a truly engaging and unique way. The trailer looks clever to boot. Our favorite website of the week!

The Kings of Summer

This next website belongs to Tool of North America, a production company known for short films. Even though it sounds more like an insult than a company, the site features slick scrolling features and is delightfully interactive. 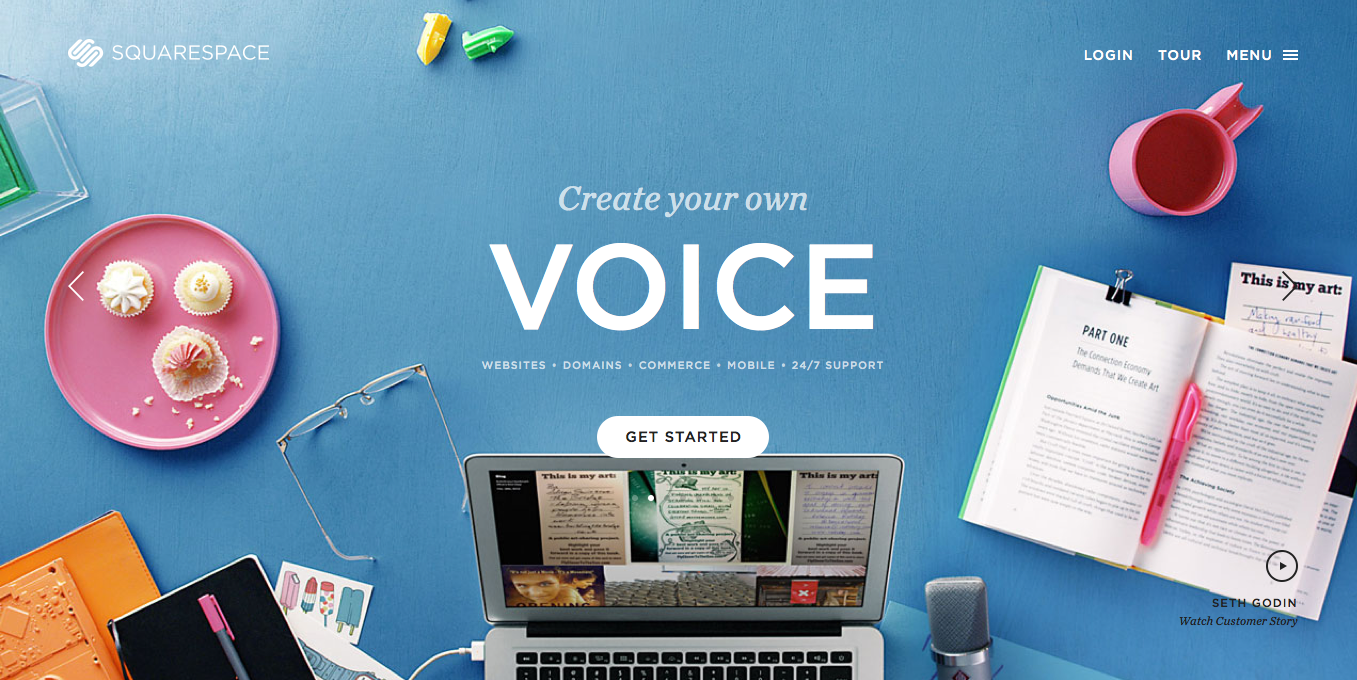 Squarespace is a New York City based startup that offers web and mobile experiences for anyone seeking a gorgeous online presence who is a bit tired of WordPress. Their templates and featured projects are beautiful and the website itself focuses on flawless design. Definitely check them out!

Which sites were your favorites? Let us know in the comments!