About the author: Ishmael Vasquez is a cultural blogger and digital technologist living in Brooklyn, New York. On his blog, Ishmael frequently advocates that brands,… 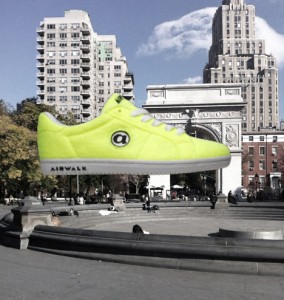 About the author: Ishmael Vasquez is a cultural blogger and digital technologist living in Brooklyn, New York. On his blog, Ishmael frequently advocates that brands, companies, and products can connect on a deeper level through insight. You can also follow him on Twitter, @ishquez.

AR Mobile startup GoldRun, which recently partnered with H&M on a virtual window shopping experience, was back on the scene to launch the world's first Invisible Pop Up Store for Airwalk with Young & Rubicam's Branded Content Division.

Airwalk is using augmented reality in combination with elements of a scavenger hunt for their classic Jim shoe. This past weekend, kicks fans went in search of limited edition Jim Plastic and Jim Tennis Airwalks using the GoldRun app.

Devised by Y&R New York’s content division, Airwalk sought to release a limited edition, re-launched Jim; the anti-gym shoe geared towards kids outside the world of organized sports and more akin to hanging on park benches or the beach. At locations such as Venice Beach and Washington Square Park, Airwalk rolled out their virtual pop up store concept and set the scene with a story told to each specific location. Those who snagged the shoes received an exclusive code that allowed them to purchase one of the only 300 pairs made for the Airwalk line.

Airwalk is a youth-focused brand. As such, it is critical for us to continually find fresh, relevant ways to connect with our target consumers. All the elements of this project fit those criteria: limited edition sneakers, the discovery component of a pop-up store, a new way to access the pop-up store with an app on your iPhone. It all made sense. Ultimately, we try to create a compelling enough brand and product story that people want to own Airwalk. So, it is necessary to have a store where people can go. The pop-up format makes if that much more special and exclusive, which is completely aligned with the exclusive nature of the two shoes we offered. Finally, the invisible, or digital, component keeps it fun and young, both of which are natural aspects of our brand.

GoldRun is a mobile platform which allows consumers the opportunity to collect merchandise and virtual objects to drive traffic to on-line and off-line destinations.

Last night I was fortunate enough to experience my first…

Screen Size, Screen Resolution, What Does It All Mean?

Screen Resolution and Screen Size are two dimensions that are…

Button Remapping is a No-No on iOS

Apple has been a bit overprotective of their hardware and…

Published by eric on January 8, 2011.
Article in General category.

Simply Postcards: Bringing The Human Touch to The 21st Century

At one point in time, a typed note was considered…

Published by eric on January 7, 2011.
Article in Startup category.

My only regret is that I did not tell everyone…

Published by eric on January 6, 2011.
Article in Mobile Future category.

The Webby Awards is an award ceremony to commemorate excellence…

Published by eric on January 5, 2011.
Article in Social Media category.

StumbleUpon Is Bigger Than Facebook (depending on how you calculate it)

Statcounter, an analytical service, has just announced that StumbleUpon has…

Published by eric on January 4, 2011.
Article in Origins category.

DisplayPad is an incredible iPad app that lets you use…

Published by eric on December 30, 2010.
Article in Companies, Startup categories.

GPS navigation was a great invention that severely hindered my…

Do you love listening to podcasts? Do you oftentimes find…

Volv: The World’s Most Important Stories In 9-Second Reads.

Do you ever get frustrated trying to figure out real…

By only working one day a week, Flutter aims…

Traditional note-taking has always created a method to store…

Keep Your House Plants Alive with Planta: The Best Plant-Care App Around

Planta is a plant-care app that aims to help…