Last month, we took a look at the importance of social media usage in political campaigns, a phenomenon which was in large part inaugurated by…

Last month, we took a look at the importance of social media usage in political campaigns, a phenomenon which was in large part inaugurated by President Obama in his ‘08 campaign. It seems that the candidates have since taken our message to heart, as both President Obama and Mitt Romney have released campaign-related mobile apps in the past week.

The Obama App: Obama for America

Obama’s app, Obama for America, is all-encompassing and geared primarily towards the Obama supporter looking to contribute to the campaign. It includes information on canvassing, donating, outreach events, as well as info on voter registration and volunteering. There’s also a section on Obama’s policy stances, with links that direct to in-depth articles on his campaign website.

We all know Obama’s on top of his game when it comes to social media. The guy has over 27 million likes on Facebook (compared to Romney’s paltry three million). Not to mention the Romney Twitter page’s recent fake follower scandal, in which the presidential candidate mysteriously got 116 thousand followers in a single day. But how does the president’s app hold up to the rest of his Internet presence? In short, pretty well.

It’s a crucial organizing tool in that it makes it easier for supporters to do some grassroots campaigning. Beyond just linking to an easy voter registration site and listing up-to-date information on state voting requirements, the app really takes advantage of location-based technology to help supporters help Obama (albeit in a sort of creepy way). Take the canvassing section of the app, which displays a map of registered voters in the app user’s area, along with those voters’ names, ages, political party in some cases, and exact addresses. The tab also displays a bland, easy-to-follow script for canvassers, and basically everything that would make it easier for an unengaged Obama supporter to become a real part of the campaigning process. And based on iTunes user reviews, it seems like supporters are actually taking advantage of the apps features. One user reports, “Makes it easy to volunteer and support my president.” 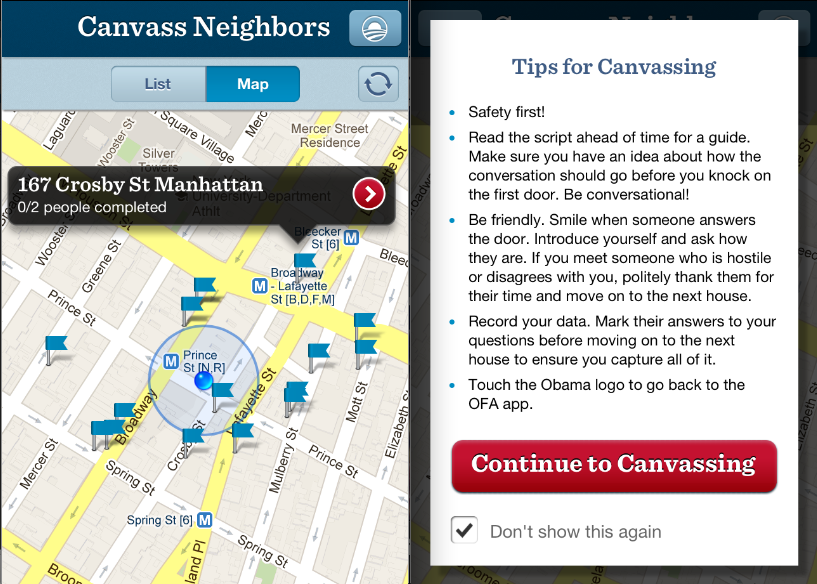 Beyond the app’s advantages in empowering Obama’s regional volunteers, its existence also confirms the incumbent’s continued focus on the youth vote. After all, they’re the ones that are setting the standard in tweeting, pinning, instagramming and the like, so by using the mobile app platform as a way of engaging users in the political process, the Obama campaign is once again empowering young voters to have their voice heard. Which is pretty cool, we think. 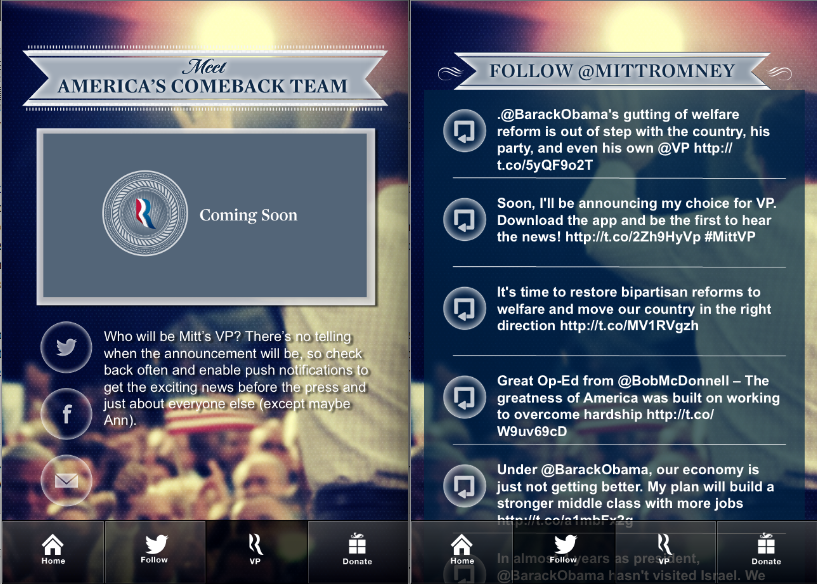 Romney’s app, in comparison, is more straightforward. Dubbed Mitt’s VP, the features are sparse and center on a page that will announce Romney’s choice for vice president, when the time comes. It’s an interesting political gimmick, having an app be the first to announce a VP selection, but it’s a sure sign of the prominence of social media in this year’s presidential race. (It’s also revealed the campaign’s newest strategic slogan: “America’s comeback team.”) Besides the upcoming VP page, the app has only a few other tabs: a home screen, a simple donation page, and a page from Romney’s official Twitter feed.

Based on the app’s utilitarian interface, the focus for Romney’s app, it seems, is less about the political engagement that could follow (which is perhaps reserved for Romney's other app, With Mitt, which allows users to upload pictures superimposed with various Romney slogans and which was famously released with a spelling error), but rather, as many point out, the potential treasure trove of user demographic information it could provide for the campaign. For users to access the app, they must enter their name, email address, phone number, and address (or they can just bypass all of that by logging in through Facebook). According to The Hill, this sign-up process “could allow the campaign large-scale data harvesting, an invaluable tool for campaign staff looking to tailor advertising and fundraising efforts.” Like Obama in ‘08 with his text message notifications, it seems that Romney’s jumping on the social-networking-as-data-collection bandwagon, albeit in a flashier, app-based format.

Despite their interface differences, both apps are chock-full of social tools that allow users to broadcast the candidates’ message through the requisite platforms like Twitter, Facebook, and email. Whether or not these gimmicks will work, though, and whether or not they’re actually improving engagement, only time will tell. While social media is great for its potential virality as well as its unique ability to allow public figures to engage with regular joes in a more intimate setting, what it’s not so great at is promoting objective, fact-based discussions of real issues. After all, how much can be said in 140 characters?