Why are Blueprints Blue?

These days, “blueprint” is a word used to describe a plan, be it physical or mental. We use it without second thought. In doing so,… 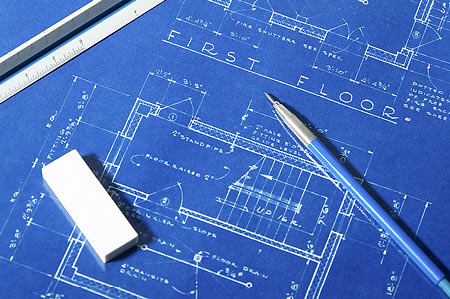 These days, “blueprint” is a word used to describe a plan, be it physical or mental. We use it without second thought. In doing so, we don’t consider the origin of the word, nor why this seemingly ancient tool is still used despite dramatic technological advances. Most of us don’t even know who still uses it for its original purposes.

So, what exactly is the classic definition of a blueprint? In 1861 in France, where blueprints began as paper-based reproductions of architecture or engineering designs, a chemist by the name of Alphonse Louis Poitevin discovered that ferro-gallate in gum turned to an insoluble, permanent blue when exposed to light. He found that when an original tracing was put over ferrous paper, then exposed to sunlight for about two minutes, the creator was left with a copy of the original image with the once-clear background replaced by the insoluble, permanent blue - high quality at low cost.

Although many industries shied away from blueprints and toward blue-lines (the opposite with a white background and blue lines), and now to computer-aided design (CAD) for various reasons, the classic blueprint has prevailed. Actual blueprints are still used in architecture and engineering, just not nearly as much. However, because of its original purpose, the term has come to signify almost any type of plan, layout, or path. Pertinent to our work here at Fueled is that a mobile or web app wireframe is often called a blueprint, as it looks quite similar and serves the same purpose.

There are plenty of widely-known examples of the use of the word blueprint. Any governmental call-to-action gets the wheels turning on a new bill by drafting a textual blueprint. Obviously, there are too many of these to recognize. One of the greatest uses of the term, not referring to the literal paper-based plan, is none other than a series of works by rapper Jay-Z. He’s made a career by creating various series’ of albums under his label, Rock-a-Fella, now RocNation. His original “Blueprint” album was released in 2001, lead by “Izzo (H.O.V.A.)” and “Renegade”. Next in line was “Blueprint 2: the Gift & the Curse”, headlined by “Excuse Me Miss” and “03 Bonnie and Clyde”. Finally, and unsurprisingly, came “Blueprint 3”, the first album after Jay-Z renamed his label. Conforming to the usual contemporary rap credo, in creating the “Blueprint” series, he says that he is the best and is therefore carving out the framework for everyone else to abide by.

A blueprint is a plan, whether actually drawn out or just some semblance of a plan that’s labeled a blueprint. There is little sign that the term will be phased out in the near future. The use of the architectural or engineering blueprint is a different story. CAD is surely the method taking over those two industries in terms of planning, surpassing the blueprint as well as its counterpart, the blue-line. The majority of us have nothing to do with paper blueprints, but it’s a nice bit of information that only you will know at the next social gathering you attend. Whip it out and impress, or just listen to Jay-Z.

Published by Andrew O'Hara on April 6, 2022.
Previous post Resolution to Finally Lose that Beer Belly? There's an App for That ← January 6, 2012 Next post → Need Quick Repairs With Cost Effective Prices? Not The C2C You’re Thinking Of January 9, 2012