Rebecca Black is living proof that technology knows no bounds. Factory produced and sold online, this once regular fourteen-year-old girl has become something of a… 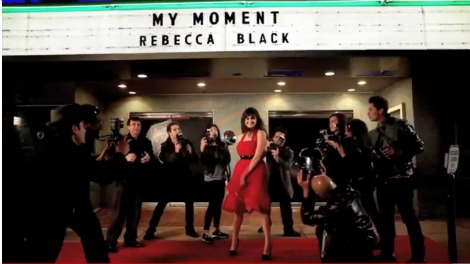 Rebecca Black is living proof that technology knows no bounds. Factory produced and sold online, this once regular fourteen-year-old girl has become something of a cyborg,  a totally computer generated commodity that refuses to disappear from the shelves of cyberspace. But Rebecca is not complaining because this Monday marked the internet release of Rebecca’s second single, “My Moment.” Throughout this musical masterpiece, Rebecca at once relishes and reasserts her net-generated fame, telling all the haters (the three million YouTube “dislike”ers) to step off–cause she’s Black, she’s back, and she’s ready to pump out some more Muzak.

However, while Rebecca is congratulating herself on her fast track to stardom, she should probably be thanking the technologies that transformed her into an automatic fame-bot. ARK Music Factory and YouTube are the two entities responsible for molding the young Rebecca Black into the primadonna that the new music video proclaims her to be.

ARK Music Factory, a label co-founded by Patrice Wilson and Clarence Jay in 2010, doesn’t even feign to promote artistry, judging from its title. The “ARK Music Factory” moniker attests to the fact that this is a company which pushes full-fledged commodities out of its “factory” doors. For a relatively small fee, the savvy music producers write, record, and mix simple pop tunes, employing their engineering magic to turn the girl next store into a bona fide pop star. Rebecca Black was no special case, really. Her mother paid the company $4,000 to write Rebecca a pop diddie and shoot the low-budget music video that became the YouTube sensation, “Friday.”

Auto-Tune:  From Oil Industry to “Friday”

Not that Rebecca is the “worst singer” in the world, but she might not be having her moment right now if it weren’t for Auto-Tune, the magic pitch corrector that ARK so obviously used to enhance Black’s performance. Auto-Tune uses a phase vocoder to correct off-pitch notes by adjusting them to the nearest semitone. Done smoothly, it creates natural sounding pitch perfection; done jauntily, it can produce an unnatural warbling that that has become trendy in hip hop and R&B.

Autotune technology has its unlikely origins in the oil industry. Geophysicist Harold “Andy” Hildebrand worked on a mathematical formula called “auto-correlatation” that scientists would use to map the underground and discover oil stores. In 1989 Andy began to study Music composition and dabble in the development of plug-ins. He founded a company called Jupiter Systems (which later became Antares) and began applying his auto-correlation formula to a new pitch-correction technology. In 1997 he released the Auto-Tune plug-in for ProTools, which became an instant hit in the recording industry.

Cher’s 1998 hit, “I Believe,” was the first major music release to implement Auto-Tune. Cher used the technology to produce deliberate voice distortion in this dance hit. Intentional vocal warping  has become quite common in the music industry (T-Pain perhaps being the most famed distortion artist), but it is still widely used to polish up pop vocals. "Quite frankly, [use of Auto-Tune] happens on almost all vocal performances you hear on the radio," said Marco Alpert, Vice President of Marketing for Antares Audio Technologies. If nearly every big-time radio artist is using Auto-Tune to sound fresh, it stands to reason that a young, untrained vocalist like Rebecca Black would have some serious work done in the studio.

Rebecca began her short journey from obscurity to psuedo-fame aboard the Auto-Tune ARK and was quickly shipped over to YouTube, which catalyzed the craze. YouTube is the third most visited website in the United States, according to Hitwise data, ranking  just below Facebook and Google. As with most sites that carry “You” in the title, the ostensible aim is to promote a democratic environment, where content is produced for and by the internet public. Officially, YouTube’s vision is “to give everyone a voice, to evolve video, and to make our partners and advertisers successful.” While it was ARK that gave Rebecca her voice, her video  must have made YouTube’s  partners and advertisers particularly happy. “Friday” was released on March 14, 2011, and went viral within a week, thanks to the “hundreds of millions” of share-happy users world-wide. By March 21st the video had gained more than 30 million views on YouTube and 40,000 copies of the song had been sold online. On June 16, Rebecca removed her video from YouTube citing copyright dispute (though it eventually reappeared on SchoolTube). By that point, “Friday” had attracted an amazing 167 million view and her fame had spilled over from the internet into the main stream media. Within weeks of release, Rebecca was interviewed on Good Morning America as well as the Tonight Show With Jay Leno. She later collaborated with Funny or Die on a number of video skits, hosted MTV’s O Music Awards, and starred in the music video for Katy Perry’s “Last Friday Night (T.G.I.F.)”. Copious covers of the song have been produced as well, most notably a folky acoustic rendition recorded by the poet-musician himself, Bob Dylan. Go figure.

Will the Moment last?

Rebecca Black’s “My Moment” is bound to gain some attention, but will it reach the viral heights of “Friday”? Probably not. According to the Associated Press, “My Moment” had received about 1.9 million views in 24 hours and as of today it has around 6.2 million. These are significant stats, but this video lacks the “this is so amazingly horrible” factor that secured “Friday”’s fate. The production value is unfortunately, unlaughable–the video looks far more professional than the last. The notably less monotone Rebecca Black gets a choreographed dance scene, a limo, and her name on the marquee. In the opening scene, the video attempts  to reposition Rebecca as a serious recording artist by placing her in a professional studio alongside a four piece band that plays literally no part in the totally synthesized song (well the keyboard is believable). It seems as though Rebecca’s producers are shooting for legitimacy this time around, and she may just be too convincing to sustain the levels of fame she reached with Friday. But who knows? After all, Rebecca is just fourteen and has already been on Billboard’s Hot 100, a feat even Brittany Spears didn’t accomplish until the ripe old age of seventeen.

While it seems that the world is fascinated by unapologetically mediocre pop stars, we should be more interested in how these pop stars are made--or the fact that they are made at all. It is not Rebecca’s talent or lack thereof that is so intriguing--it is the remaking of a cultural myth that is happening before our eyes. In Rebecca Black’s Cinderella story, technology plays the part of the fairy godmother, a significant recasting. Successes that had traditionally been attributed to “magic,” a stand in for natural forces such as luck, fate, happenstance, and “having a good heart”–or the hard work and determination of the 20th century Algerian version–can now be  attributed to the unnatural intervention of game changing technologies. Digital audio developments and social media sites are forces to be reckoned with on their own, but together they threaten to flood the media with factory produced, perky, and smiling pop-bots.