Independent local businesses don’t buy into the dot-com hype like the rest of the world. Services like Amazon and online-offline retailers like Walmart flex the type…

Independent local businesses don’t buy into the dot-com hype like the rest of the world. Services like Amazon and online-offline retailers like Walmart flex the type of power enabled by enormity. Low-costs are made possible by large stock, and marketing budgets exist on an entirely different plane than the yearly gross of most small businesses.

In many cases, as one large business consumes a smaller competitor, a number of values are lost: resources are more widely allocated, disrupting local revenue streams; local craftsman lose work, bringing culture with them; product quality, more often than not, decreases. Worse yet when that product is food, which, when produced in mass, detrimentally affects the health of consumers due to the low quality, high volume mentality of its makers.

But the solution isn’t solely in redirecting our attention and spending habits; locally-produced foods are often times inaccessible, limited to food stands, markets, and high prices brought about by the cost of careful, meticulous production. Funny, then, that Farmigo, a California-based startup, would find its solution in the Internet, where founders Benzi Ronen and Yossi Pik are scaling local, organic farming in order to bring it to the masses. 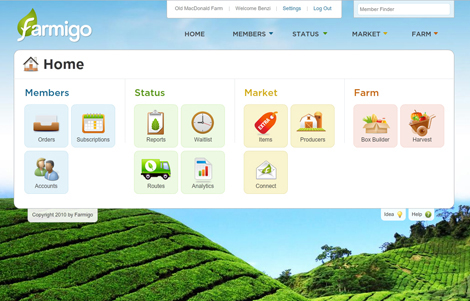 Farmigo’s solution is two-sided: for consumers, its an online market that allows for food subscriptions with local producers, who make weekly deliveries at specified drop-off locations; for farmers, it's an online portal for managing the harvest, sale, and distribution of their products. Currently in beta, the site allows visitors to search for producers by location, which are spread across the United States. If one doesn’t exist, they’re invited to start a location themselves, which will be orchestrated with local farms through the Farmigo team.

The farmers, in turn, specify the length and terms of the commitment, and they receive transactions directly. Users are able to specify weekly add-ons, depending upon the farmers’ capabilities and preferences. Farmigo, which simply orchestrates the relationship while leaving the majority of control in the hands of the farmers, takes a 2-percent cut, pulled directly from the producer, so the cost is not felt directly by the consumer. 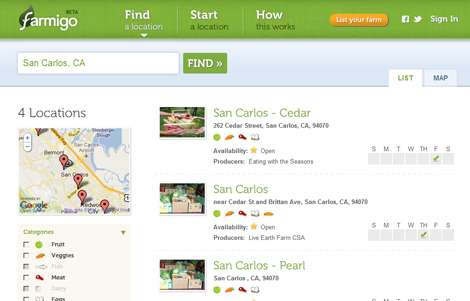 In short, the service is focused on the formation of a relationship, a step into the past that adds visibility to our consumption habits. International brands, the likes of which line our grocery aisles, benefit well from mystery, with so many steps between the producer and consumer that little thought is given to nutrients and their absence. Rather than move product from a more thoughtful beginning to a more appreciated end, Farmigo is harvesting a relationship that better demonstrates and, more importantly, maintains the values lost to mass production.