SeeClickFix: A Mobile App for Your Neighborhood Problem

Who to Call? Have you ever seen anything in a park or in the street that needed fixing? If yes, did you report it to…

Have you ever seen anything in a park or in the street that needed fixing? If yes, did you report it to the appropriate city office to be fixed? If no, why not? Although many of us would like to report an incident of graffiti or something that needs fixing, we simply don’t have the time to go to our city or district website, hunt down the exact phone number, and leave a message with no assurance that anything will get done. In an attempt to better connect the community with local government, the mobile app SeeClickFix allows residents of any local area to quickly report non-emergency problems such as burned out street lights, potholes, or graffiti to the correct personnel. 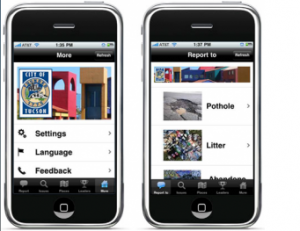 How Does it Work?

According to Alexia Tsotsis on Techcrunch, “SeeClickFix lets users view and vote on complaints based on location, report and assign issues, as well as comment on issues and view the profiles of people who report issues nearby.” Users tag the exact location of the problem on a map and leave information about the type of complaint, which is then forwarded to the appropriate municipal office. Once posted, the problem is made public and other users can comment. In addition, points are given as incentive to those who report problems or upload pictures via the SeeClickFix Facebook application.

While many local and municipal offices still run on  post-it notes and overhead projectors, Alexia Tsotsis sees the SeeClickFix app “an early sign of the new civic direction,” linking technology to civic engagement. SeeClickFix is currently used by 50 city governments, with branded apps and widgets in the works for government clients.

Dang. If there is an app that dials in on…

Apple’s portrait mode in the default Camera app is an…