It’s difficult to determine what exactly food trucks emulate, if anything at all. Food carts, for example, have been a city staple seemingly forever, dolling…

It’s difficult to determine what exactly food trucks emulate, if anything at all. Food carts, for example, have been a city staple seemingly forever, dolling out blandness at low prices to masses on their hustle to work. Mobile and infinite, they’re present when you need them and invisible when you don’t, not guilty of taking prime real estate from New York's culinary experts.

Food carts, on the other hand, have the feel of a youthful craze, particularly in neighborhoods like Williamsburg, Brooklyn, where one after another stretches onward and onward down Bedford Avenue. Where a cart is almost symbolically composed of foggy glass, carts across Brooklyn, Manhattan, and other boroughs are smeared in color and decoration. In the end, though, it’s not for show - the dishes passed from vendor to customer are increasingly unique and remarkable, ranging from lobster to dumplings to Belgian waffles.

All of that being said, they are, in the end, trucks, and they come and go. That’s where Tweat.it, launched in 2010, comes into play. The service is a mapping visualization engine for Twitter, created by foodies Jess Eddy and Joel Potischman to simply and efficiently solve the problem of food trucks on-the-run. “Imagine that your favorite meal travels around town on a daily - and sometimes hourly - basis but you had no easy way to know when it was near you,” Eddy said. “That's the problem we've solved.” 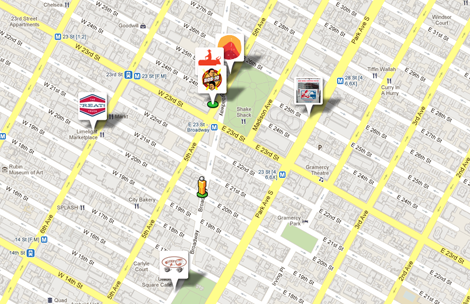 One of Tweat.it’s defining strengths is that it doesn’t, in fact, rely on active participation from vendors, curtailing the need for a costly sales force and approach to partnerships, not to mention a vendor-friendly dashboard of sorts to allow a constant stream of updates. Instead, the service gathers tweets from the food trucks’ accounts, extracting and mapping locations as they move. “While we can’t tell you all about the special sauce, we built a proprietary technology that allows us to follow the trucks on Twitter, find locations mentioned in their tweets, then map those locations in real time,” Eddy explained. “People could certainly follow the food trucks on Twitter and wade through their day’s stream to find the trucks, but a map is a far faster and more intuitive way to interact with location-based, real-time data.”

For food truck fans, the effort is equally effortless - just visit the site or pop open the iPhone app and locations are instantly on display. In combining a Twitter feed with a map, tracking progress is as simple as reading and watching, a particularly important element in light of changing food truck regulations and protest from traditional vendors. “If a truck moves, our map reflects that move as soon as they tweet about it,” Eddy said. “Nobody else does that.” It only takes a momentary visit to the site to see just how quickly things can change; today, December 15, for example, Luke’s Lobster was just unexpectedly pushed onward, tweeting, “Peddlers division has politely asked us to move and we are complying. The day is not a bust, though. We'll re-group and inform you soon.”

As foodies themselves, Eddy, Potischman, and their developer David Cascino have a few suggestions. Collectively, they round out the enormous range - and therefore Tweat.it value - emerging in New York: Bian Dang, specializing in Taiwanese-style fried chicken over rice; Kimchi Taco, for Korean-barbecue tacos; and Wafels and Dinges, Belgian-style waffles with everything from pulled pork to bacon syrup, among many others. As the industry and app develop simultaneously, this growth is poised to continue, and it's bound to be mutually beneficial in the process. But the team has bigger hopes for their technology, Eddy said. “We haven't just solved the problem of finding food trucks; we've solved the problem of extracting and displaying location information from streams of textual data,” she explained. “We won't forget about food trucks, but we have a lot more we want to do in this space.”

Published by Andrew O'Hara on December 1, 2021.
Previous post Use Your Phone to Know Where to Park Before Arriving at Your Destination ← December 15, 2011 Next post → It's Time to Occupy The Internet December 15, 2011