Don’t Let the Internet Vanish Before Your Eyes

Online communities have certainly made plenty of effort in voicing their opposition to SOPA, and rightfully so - the bill would, in many ways, altogether… 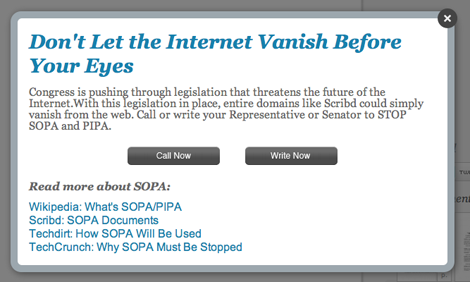 Online communities have certainly made plenty of effort in voicing their opposition to SOPA, and rightfully so - the bill would, in many ways, altogether put a stop to the free flow of information on which the Internet is built. They’re using, of course, the web itself, embracing recent advancements in information-sharing to get their voices heard: explainer videos, infographics, and social media, just to start.

Scribd, a site that aims to “liberate the written word” by making it quick and easy to share documents, has taken the next step by providing a visual, literal understanding of SOPA’s intentions. Today, when you visit the site, every document will disappear word-by-word, all in an effort to demonstrate the dooming effects of SOPA on the free flow of information. After all content is gone, readers are led to Fight for the Future, one of many anti-SOPA sources.

Regardless of its potential day-to-day - or minute-to-minute, in fact - impact on the general population, a certain shortage of public indifference is to be expected, especially with a range of political issues - the 2012 election, the conclusion of the war in Iraq, Rick Perry’s belief in the existence of “Kim Jong the Second” - already on the forefront of the news. Scribd has undermined this indifference by making it inescapable and literal, showing a passive population what censorship actually feels like. Let’s simply hope the impact is felt by today.

Published by Michael Abraha on October 12, 2022.
Previous post The Geo-Social Show Goes On ← December 21, 2011 Next post → As the NBA Takes to Facebook the Big Questions are Left Unanswered December 22, 2011