A rendering of the future live Facebook Wall. Photo credit: Mashable.com Mashable is moving the location of their “world’s largest Facebook wall.” No, they’re not…

Mashable is moving the location of their “world’s largest Facebook wall.” No, they’re not jumping ship in favor of  Google + just yet. We’re talking about a literal wall (remember those?), which Mashable wants to see plastered with the Facebook icons of its most enthusiastic fans.

Mashable announced its wall plans in November 2010, hoping to have 500,000 of their 10 million readers’ mugs collected by the new year. Apparently the plan was put on hold, and now the team is moving out of its current New York City headquarters. Readers, don’t fret. You can still get your face in front of your favorite Mashable writers because they’re taking the wall concept with them. While the Mashable team moves from E 24th and Park Avenue to a larger downtown space, readers will still have time to submit their Facebook profiles to the project. The deadline for joining the wall has been extended to September 1st, so make sure you pick out the perfect profile picture by then.

How are they getting my face on their wall, exactly? 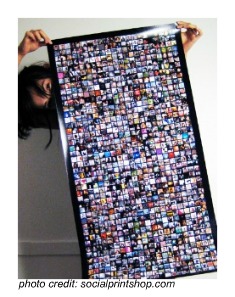 Mashable has partnered with SocialPrintshop for this stunt. The company takes your social media profile and turns it into art...sort of. In the Social Print Studio, your Facebook Page, your Twitter, and even you Tumblr are potential palettes. SocialPrintshop can collect images from your Tumblr or your Facebook albums and print them together in a neat grid. Twitter creations include the “Egoist” and the “Fanboy,” the Egoist being a mosaic of your followers’ gravatars and the Fanboy a collection of gravatars from the profiles of those whom you follow. Your Facebook friends are also fair game--the site will create posters made of all your friends’ profile pictures, which is exactly the idea behind Mashable’s giant Facebook wall.

An erudite Analysis of SocialPrintshop Posters 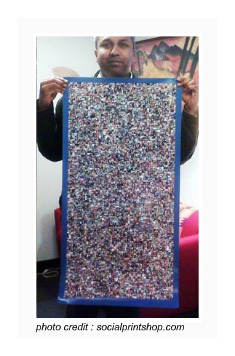 Just for fun, let’s pretend that this is art and probe it for potential meaning. These social media grids might be read as a comment upon our culture of excess, propagated by digital media. Who among us, for example, could claim to have 300 actual friends before Facebook? Who really owned 1,000 albums before mP3’s? On social media sites, making connections is more like collecting connections, ones that are intangible and oftentimes insignificant. Looking at a poster filled with your Facebook friends’ faces is like looking at a kid’s rock collection--each stone may be unique in shape and color but together they just look like a heap of gravel. The more “friends” you have, the less intelligible each individual face becomes. The grid format also reminds one of those housing developments decried by individualists for their mass production, conformity, and lack of a “personality”. This is what the grid does to your Facebook friends. It highlights the surface nature of a “profile page” and  reminds us that we have relatively limited control of our small spaces on the web. Any personal information we put online is instantly repurposed as market research. Once you step back and look at the larger picture of social media you begin to realize how boxed in you really are.

What does this have to do with Mashable’s giant Facebook wall? Not a lot, but when we turn a cynical eye on the project it may be more of a tribute to the success of Mashable than to the devotion of its readers. Still, we can’t blame a web site for being proud of its success, and Mashable is, in fact, moving up in the world quite swiftly. According to BetaBeat, the company chose a space about five times bigger than the Park Avenue office in order to accommodate the growing team. Much of Mashable’s traffic comes in from Facebook and Twitter links--the site has even developed the Mashable Follow button which allows you to share with all your social media profiles in once click. “We got an audience that is keenly interested in using the megaphone of social media and that has been a strategic advantage for us,” said Mashable’s CEO, Pete Cashmore.The large-as-life Facebook wall, then, is a  creative way for Mashable to pay tribute not just to readers, but also to the social tools that have propelled them forward.