Pair, the new kid in the App Store, lets you create a personal network with your other half. This iPhone app has been on… 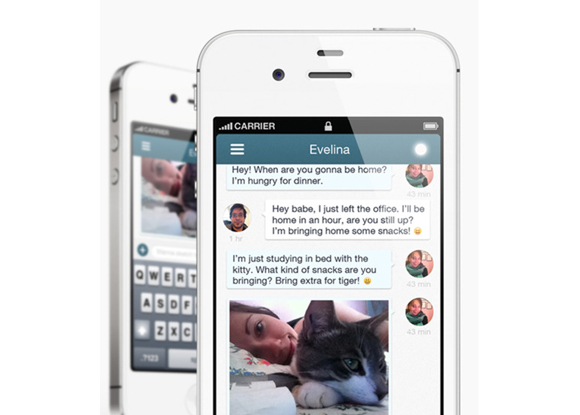 Pair, the new kid in the App Store, lets you create a personal network with your other half. This iPhone app has been on the Apple store for a week and had 50,000 downloads in the first 4 days. Couples everywhere seem to love the idea of having their own social network where they can chat, share photos, videos, and locations with the touch of a button.

Three out of five creators of Pair are in long distance relationships and felt it was about time someone created an app that let you have a personal space with your partner. It is tiring to juggle Skype dates, texting, phone calls, and even answering questions like “Where are you, baby?”  Pair puts all this in one place so you can move past your kludged multi-app setup.

According to creator Oleg Kostour, his application is similar to Path, but limited to two people. Apart from the regular features of chat, Pair lets you make to-do lists together and set reminders for birthdays and anniversaries. The application even lets you draw together. The ‘thumbkiss’ feature is the winner. When your partner presses his thumb on his phone screen you can see his thumbprint and when you place your thumb on the same spot, both the phones vibrate for a thumbkiss. The Moments section is where you can share photos and videos with your partner. Pair also allows you transition into FaceTime with a single swipe.

To create a Pair is fairly simple. You can invite your partner with a video or a text message and once they accept, the connection is created. You can only be a part of one Pair at a time (as is true for real life, hopefully), but it’s easy to unpair and re-pair. The application is limited to iPhone users for now, but the Android version is in the pipeline and should be available in a matter of weeks.

The reviews for Pair have been great. It has 4+ stars on the App Store and the comments section on the articles featured on TechCrunch and Mashable are exploding with excited users. One such user commented saying the idea was genius because the women are going to love it and force men to get it. Users have also pointed out a few drawbacks, like being unable to caption photos and that messages are cluttered together as if they were all sent at the same time.

With a rising number of couples in long distance relationships, Pair definitely has an audience. With the creators fixing the bugs and adding features to their application, Pair should continue to become popular for couples desperate for an effortless and fun space to communicate.