RIM: The Downfall Last year, I decided it was time to lay my 4-year-old BlackBerry to rest. Excited at the prospect of finally being able… 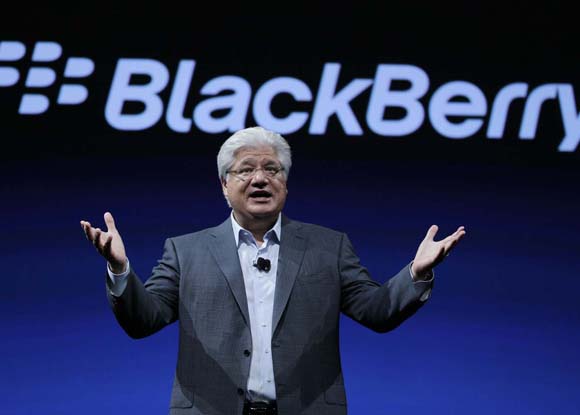 Last year, I decided it was time to lay my 4-year-old BlackBerry to rest. Excited at the prospect of finally being able to speak to me on my phone, assuming an iPhone was the next step, my friends concluded that I had lost my mind when I returned...with another BlackBerry.

Shares of Research in Motion (RIM), makers of BlackBerry, fell another 11-percent late last year to a new seven-year low, capping a year-long rout that has slashed the share price 77-percent since the start of 2011. At the same time, IDC said shipments of RIM smartphones fell from 12.4-million to 11.8-million smartphones during the same period.

Just last month, on January 23rd, RIM stocks fell another 8-percent following the CEO transition from Mike Lazaridis and Jim Balsillie to Thorsten Heins. Heins, the new CEO of RIM, has been plucked from the company’s relatively obscure COO position to fill the giant shoes of two longtime co-CEOs as they depart at the behest of angry investors. Having pioneered the smartphone industry with its BlackBerry, RIM is now dangerously adrift.

The massive BlackBerry Messenger outage in 2011 was the final straw for a lot of users who were already on the fence about switching to the iPhone or Android devices. RIM recently refreshed their product line with the BlackBerry Bold 9900, but that didn't seem to help much either. Although a lot of BlackBerry users were hopeful that the updates would be the turning point for BlackBerry, it just wasn’t enough.

While HTC, Samsung, Motorola, and other companies were steadily releasing new products almost every month, RIM didn't release a new BlackBerry in North America in 2011 until mid-year. In this world, where technology is constantly being tweaked, repetition is reputation, and if RIM's not repeatedly releasing with new products, it will most definitely continue to lose attention.

According to analyst Rob Enderle’s report, RIM seems to have a great technological base, but many are of the opinion that RIM needs to focus more on enterprise. If they can find someone that can develop a mass market strategy and communicate hope for the brand 2012, RIM may be able to rebound and recover it’s fast depleting customer base. "RIM reminds me of a beloved grandparent. You love them, but they are very outdated and sooner or later they will be gone," said independent analyst Jeff Kagan.

But the picture for RIM isn't all dreary, especially outside of North America, where RIM's BlackBerry Messenger instant messenger service is popular, and where the company is drawing in young users to a wide range of new BlackBerry smartphones. In places like India, Blackberry is still one of the most popular phones, although Android seems to be edging its way in. There seem to be two main reasons for this: First, the free Blackberry Messenger application is a great draw for users; secondly, and possibly the biggest reason Blackberry seems to be doing so well in India, the iPhone is not supported very well by a lot of the largest Indian networks.

Most people seem to get sucked into the world of Apple because every time they buy one app, they further invest themselves in the brand. They don’t lose their contacts, messages, favorite family pictures, or anything else when they update any of their devices, because of Apple’s brilliant integration and features like the iCloud.

I personally have an iPod, a MacBook Pro, and a Blackberry phone. So when I want to sync information from one to the another, I’m often left frustrated. It's not just customer loyalty, it's just an incredibly smart branding strategy.

So, why are they still making apps for BlackBerry?

Essentially then, it seems that what RIM needs is an app or service for complete integration, something that Paris-based Viadeo is now providing. Viadeo, the social network for professionals, has announced that its mobile app is now available for BlackBerry, joining the apps for the Android and iPhone.

The Viadeo app gives BlackBerry smartphone users access to all the main Viadeo features, including contacts, news feeds, messages, profile visits, and easy search functions. However - and here’s the kicker - in addition to the standard social network features, Viadeo for BlackBerry is a smart application that integrates with the browser, address book, and other apps that already exist on the BlackBerry. Unlike LinkedIn, which requires users to log-in every time they want to make or view changes, Viadeo allows users to have access to their address book wherever they are, read and reply to messages, see who’s visited their profile, view their pending connection requests, keep up-to-date with the latest from their contacts, and easily invite friends or family straight to the network. Voila! Instant iCloud for RIM.

It has always been known that the BlackBerry was primarily a business phone. These handsets are so designed to make communication easier, faster, and more secure anywhere in the world.  When Apple came in however, they completely revolutionized the smartphone, and RIM just didn’t keep up. The introduction of Viadeo therefore may mean that RIM may finally be one step closer to keeping its place in the smartphone market.