There are quite a lot of factors that contribute to the madness of March. First off, as my first grade teacher once told me, March… 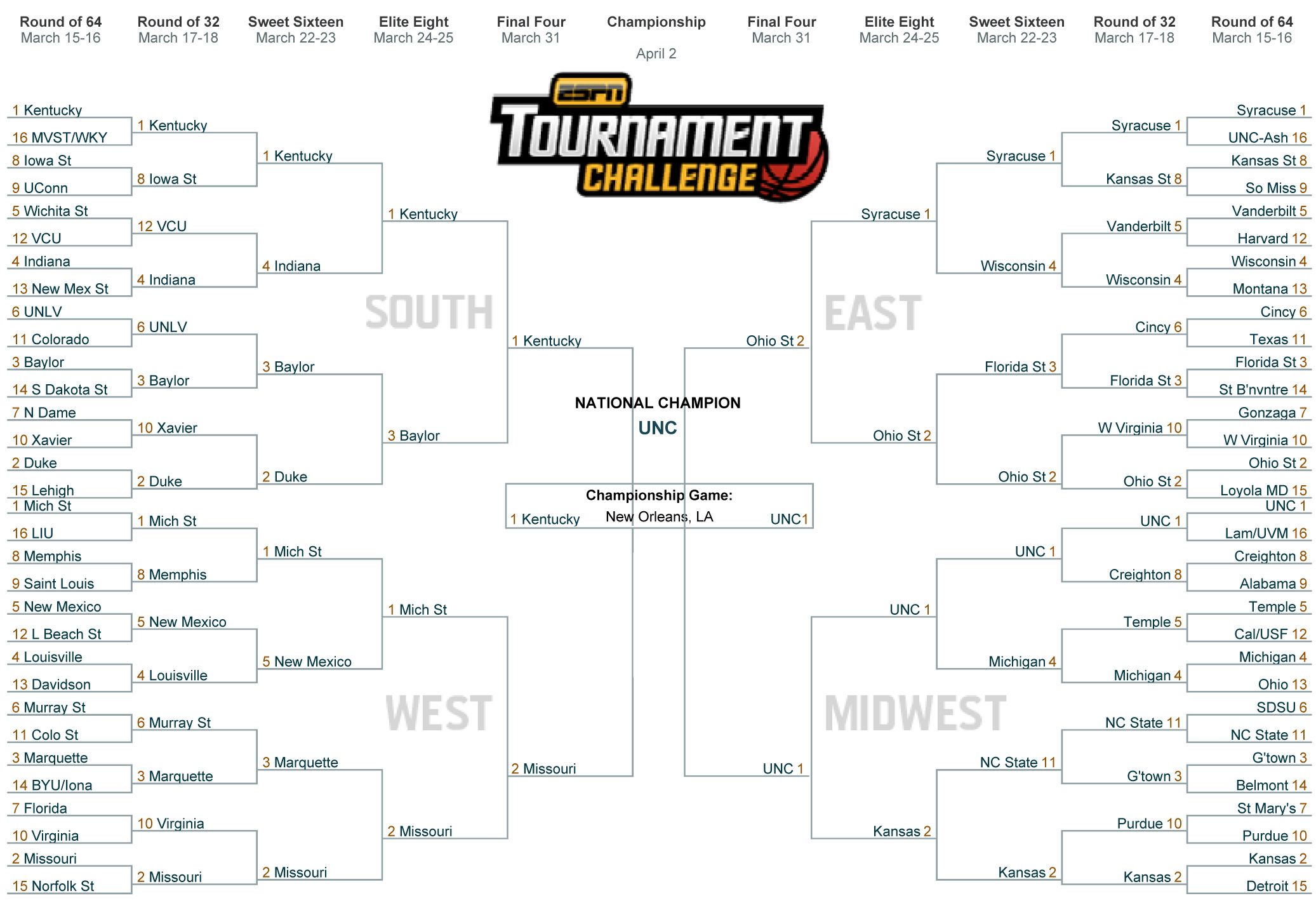 There are quite a lot of factors that contribute to the madness of March. First off, as my first grade teacher once told me, March comes in like a lion and goes out like a lamb. She knew March is the month that starts out with sporadic Winter storms and ends with the first flowers of Spring. It is also the month that inspired the famous “E tu Brute” phrase, being the month the Romans finally took down Caesar leading to his legacy of “Hot and Ready” pizzas and oft quoted "Mean Girls" references. And how can one forget about St. Patrick’s Day. Well, I can think of several reasons why someone would not remember the events of St. Patrick’s.

With all these events, there is still one March tradition that remains the maddest. It is so mad, madness is part of it’s name. Yes college basketball fans, March is the month of “March Madness.”

Considering that the madness has already begun, I bet you are clutching your print out or handwritten bracket in your hands, praying to the powers that be that your bracket is the perfect one.

This year, app stores are getting in on the action with apps that they hope will take filling out brackets and sharing the madness with close friends and family to the next level. Here are three apps leading the way:

ESPN is the go to place for sports coverage, spanning television, print, radio, and web. It is only fitting that it would have an app for coverage of March Madness.

The great thing about this ESPN's Bracketbound is that it is free. It is the only bracket app on my list that won’t break the bank while you are trying to have some March Madness fun.

Of course, each bracket app features its own bracket. The differences between the apps lies in the design. ESPN is definitely the boldest with it’s use of reds, blacks, and yellows. It’s look is top notch.

Bracketbound also offers the user full coverage, including videos, news articles, highlights, and stats in addition to its bracket. In order to watch games live from the app requires signing up for the ESPN Watch app.

Creating a bracket on this particular app can lead to a lot of cash because users who enter into a bracket contest can win up to $10,000.

Though I feel the app is the most fun too look at and offers extensive coverage, it has a ranking of 3.5 in the Apple App store. Reviewers of the app say that the app has a tendency to crash, and the ESPN Watch app, though free, requires a DirectTV subscription.

The extra features in the app are probably best left to another free editorial app. Strip the ESPN app of it’s smoke and mirrors, you can still have a functional bracket on your iPhone that keeps track of real time results for free.

Simple Bracket is a less flashier app than Bracketbound. It comes from the duo behind Studio Neat, Tom Gerhardt and Dan Provost. The two gained notoriety by using Kickstarter as a way to gain funding for now successful endeavors such as the Glif and Cosmonaut. The two raised well over ten grand from Kickstarter to fund Simple Bracket.

Bracketbound is to Las Vegas as Simple Bracket is to the most hipster sections of Williamsburg. Simple Brackets' design is reminiscent of the 1970s and is close to the aesthetic appeal of a Wes Anderson movie.

In addition to having its own "Macklemore Thrift Shop" style, the app attempts to revolutionize the bracket app by trading simple scoring systems for more complex ones based on past performances and taking into consideration upset picks.

Whereas Bracketbound tries to incorporate full editorial coverage, Simple Bracket sticks to the bracket. The bracket, instead of being separated by region, displays all the match-ups in a single vertical scroll. As the rounds continue, the user of the app can use the touch screen function of his or her mobile device to slide over to the next round.

The app currently has a 4 star rating in the app store. Reviewers of the app appreciate its simplicity but are not too keen on needing a Twitter account to sign up. Another set back is that the app is 99 cents and is only available for iOS.

The final bracket app on my list is Pocket Bracket. Pocket Bracket, much like Simple Bracket, focuses mostly on the bracket itself, though it does have a function where the user can read up on current stats, much like Bracketbound.

Pocket Bracket allows for unlimited private as well as public brackets to be created. It has a leadership board, so users can see how they match up to others in the Pocket Bracket community.

It has a current ranking of 4.5 stars with reviewers praising its simplicity and unlimited pools and brackets. The app can be purchased on Android, iOS, and Windows phone platforms. Compared to the others, however, the ranking is based off of 12 user votes.

The app falls flat on its visuals. It’s simple but, unlike Simple Bracket, lacks a simple creative design. It is also an app that costs .99 cents which may turn off some penny pinchers.

All in all, as I prepare for the tidal wave of games ahead, I am going to go with Simple Bracket. Though not a free app, I support the forward thinking aspects that are unique to the app such as the scoring system and touch screen capabilities.

I also like the fashion/design of the app. I didn't see much negativity for the app beyond needing a twitter account to activate it. But, to be honest, if a person is relevant and techie enough to own an iPhone, he or she should probably get him or herself a twitter account. That person doesn't even have to use it. I don’t see the difference in signing up for a hypothetical Simple Bracket account.