Here are three numbers: 4,795, 1005, and 0. What’s the significance? They are, as of July 15, the total number of tweets posted by the presidential campaigns of Barack Obama, Mitt Romney, and Theodore Roosevelt, respectively. To be fair, Teddy Roosevelt predates Twitter by a century — but, if he were a candidate today, he would undoubtedly be using Twitter and other forms of social media for his campaign. His famous moose riding photograph would be Instagram gold.

In Teddy’s time, pamphlets, parades, speeches, and fashionable eyewear were enough to win. Unfortunately, this is no longer the case. A social media presence has become an essential part of running for public office in the United States. Obama proved this by utilizing Facebook, Twitter, and YouTube to galvanize his supporters and raise funds during his 2008 campaign for the presidency. Since then, he has expanded his social media arsenal to Spotify, Tumblr, Instagram, Pinterest, and Google+. While he easily outclassed John McCain in the 2008 election, Obama will face a greater challenge in Romney, as the Republican Party wisely observed Obama’s 2008 tactics and resolved to approach social media with greater intensity. Already, Romney has a sizable presence on Facebook, Twitter, Youtube, and Tumblr.

Still, Obama holds a home-state advantage in the world of social media. His Facebook has over 27 million likes and his Twitter has over 17.5 million followers. He operates a well-greased social media machine. In comparison, Romney has over 2.3 million Facebook likes and over 650,000 Twitter followers. Romney may hold an advantage in fundraising for the upcoming election, but Obama has the edge in social media. Fortunately for Romney, Pinterest and Instagram aren’t swing states. 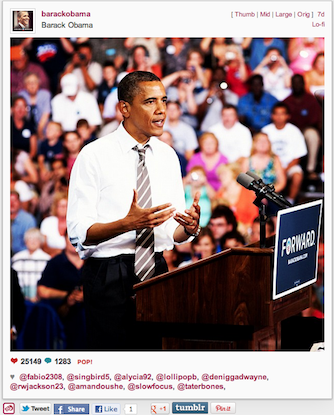 While the candidates’ use of Facebook is very similar, their Twitter tactics could not be more different. Since July 10, Romney has posted nine tweets, six of which were directly attacking Obama. In comparison, Obama has released a volley of 117 tweets since the July 10. 14 of them were negative. Furthermore, Obama has live-tweeted campaign events and has retweeted other accounts. Rather than attacking Romney with the main account, Obama’s social media team created an account called TruthTeam2012 perform just this function. If Obama’s main account is hopeful and positive, the TruthTeam2012 account is belligerent and negative. It’s the military arm, if you will, of Obama’s social media presence.

The Real Value of Social Media

Obama will receive the larger share of the social media buzz in the upcoming election. That is undeniable. But will his enormous social media popularity translate into votes? Not necessarily.
The three most recent national polls, conducted by the Pew Research Center, Quinnipiac University, and Washington Post-ABC News paint a competitive picture for the upcoming election. According to Pew, Obama holds a comfortable seven point lead. However, Quinnipiac University found Obama to hold a slight 3 percent lead and the Washington Post poll found the race to be a dead heat. Social media can absolutely help a candidate, but it is not the end-all be-all. If this were the case, we’d be ruled by the iron fist of Eminem.

Here’s a statistic that may surprise you — the Pew Research Center found that 47 percent of American adults use a social media site. And half of all adult social media users are over 35. There is a fairly good chance that you know of someone who has both an AARP subscription and a Facebook account. Politicians recognize this. If social media was purely the domain of the young, they wouldn’t focus so much on it. We (speaking for the 18- to 24-year-old demographic) simply don’t vote as often as other age groups. Furthermore, the primary target of social media advertising is Facebook. According to the survey, 92 percent of social media users had a Facebook. The next highest? Back from the early 2000s, it’s Myspace. 13 percent had a Twitter account. As you can see, Facebook is the center of the social media nexus. Everything else (Twitter, LinkedIn, Pinterest, etc.) is what one would call “accessory.” That is to say, if you have a Pinterest account, it’s almost a certainty that you will also have a Facebook. The converse, however, is not necessarily true.

The Pew study also provided some interesting insight into the relationship between political activism and Facebook use. The study found that users who visited Facebook multiple times per day, in comparison to other internet users, were 2.5 times more likely to attend a political rally, 57 percent more likely to try and convince someone on their vote, and 43 percent to have said they voted. Keep in mind this is a correlation, and not exactly a causation. A person that begins using Facebook won’t instantly start shouting conservative or liberal gospel from the rooftops. Generally, the kind of people that gravitate towards Facebook are more likely to be already politically engaged. Between the 2004 and 2008 presidential elections, voter turnout didn’t improve by much, despite an enormous increase in the use of social media.

A solid Facebook presence can elevate the enthusiasm of a voter base. Social media is a great platform for organizing rallies and encouraging people to donate to a campaign. Additionally, the Facebook pages of both Romney and Obama continually put up videos and images with their message with the intent being that their followers will like or share the content. As a result, the content pops up on the newsfeeds of the follower’s friends, inspiring agreement in some and furious clicks of the “unfriend” button in others. In fact, the amount of sharing, commenting, and liking on posts is, according to Alexander Howard, Gov 2.0 correspondent for O’Reilly Media, more important to political success than the total number of followers. These actions are cumulatively known as “engagement”. Engaged users are more likely to proselytize for candidates and influence the voting choices of others. If you take a gander at your Facebook newsfeed, there’s a fairly good chance you’ll come across some political content that was shared or liked by a friend. This engagement is the true value of social media.

Have to Have: the Universal Fashion Wishlist

Fashionistas are a fierce bunch. Styles wink in and…

Published by Kiran on July 17, 2012.
Article in Mobile, Android categories.

While Apple and Google seem to be splitting the smartphone…

Uber: Hybrids At Your Fingertips

With intricate technology and a research-driven business plan, Uber…

The storm collided with Washington, DC, on the night of…

SeatGeek – A New Mecca for Concert-goers and Sports Fans

Fans of the New York Giants and fans of Justin…

Is Brooks Brothers Too Classy for Social Media?

An Exclusive Look at RebelMouse: The Social Media Homepage

Take a look at your favorite company’s social media…

Pandora: A Paragon Of Its Industry

One may think that Pandora’s popularity would directly…