From Cheetah to Snow Leopard, Apple has been advancing its OS X for over a decade, and this month the seventh iteration will be crowned…

From Cheetah to Snow Leopard, Apple has been advancing its OS X for over a decade, and this month the seventh iteration will be crowned King of the Jungle. 9to5 Mac predicts that OS X 10.7 Lion will saunter into App stores on July 14th (along with the newest version of Macbook Air,as rumor states). Apple developers seem to have come up with some nifty ideas for making this version of OS X more user friendly than ever--but is Lion a truly significant upgrade? Techies who have already toyed with the Gold master version of the product think so.  "I’m pleased to report it is stable and a unique version of OS X, more complete than other, iterative updates like Snow Leopard," wrote CrunchGear's John Biggs. The International Business Times concurred, stating that "The OS X Lion represents a quantum leap forward in terms of OS advancement."

I don't know anyone who isn't totally gaga over their iPhone…and why not? It's the most attractive, fun, and user-friendly mobile device out there  (in my own biased opinion). With OS X Lion, many of these fun features have been integrated into the desktop experience, which will certainly please the hoards of Apple admirers. These are some of the iPhone-esque features to anticipate: 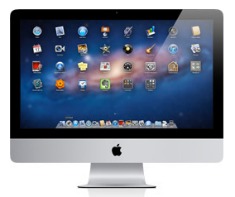 Launchpad: Launchpad is basically an iPhone screen for your desktop. It's a "home for all the apps on your Mac." The apps are organized in a grid-like manner and can be shuffled, deleted, or combined into folders, just like on the iPhone. You can access additional app screens by swiping right or left on your track pad.

Gestures: Zooming, scrolling, and moving between pages will now be as easy as it is on your iPhone. No more mashing the "Apple +" buttons when you're trying to zoom in on that tiny web-text. In Safari, Preview, or iPhoto simply double tap or pinch the pad in order to enlarge or reduce your object. Swiping left or right will fluidly usher in a new web page or app, while spreading three fingers across the track pad pushes all open windows out of the way to reveal the desktop (formerly F11). You'll even get that gratifying iPhone bounce-back when you scroll past the top (or bottom) of a page.

Mail: The new Mail app also mimics the the iPhone in that it accommodates threaded conversations and keeps new messages neatly arranged in the narrow left pane. The app takes advantage of the Mac's widescreen format by providing ample room for image attachments an such to open in the right pane.

The App Store comes pre-installed on Lion and enables push notifications to be sent straight to your desktop (again…just like the iPhone). However, Apple wouldn't be Apple if its products were total clones. Many of Lion's attributes are designed specifically (though not exclusively, of course) for Mac computers. AirDrop, for example, is an excellent feature that allows you to send files to almost anyone in your area without worrying about network configuration or flash drives. AirDrop identifies other Mac users lists them in the Finder. Users can simply drag and drop their files straight onto others' AirDrop icons. The app even protects your files by dropping a firewall in between the sender and recipient during transfers. 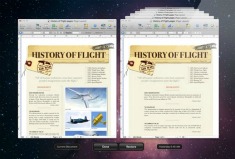 Another useful feature is All My Files, which intelligently displays every file on your computer (excluding uncommon ones like system files) in a single finder window. The files are arranged by type and can be searched accordingly. Equally exiting is the Versions feature, which is kind of like Time Machine for individual documents. The program automatically saves different versions of the file every hour, and you can manually save a version any time. The app also has a side-by-side comparison feature that highlights differences by allowing you to literally hold one version up to another.

If you like the iPhone, you'll like Lion. If you don't have an iPhone, you'll probably still like Lion.  According to Apple, Lion will definitely be released to the public this month, and tech forecasters are sticking with their July 14 predictions. The upgrade will cost $29.99 and will be available sans-disk exclusively via the App store--more good news for Mac lovers who would prefer not to deal with the release-date mayhem of Apple retail shops.