More and more cities are expanding their options for cyclists in an effort to go green and reduce traffic congestion, as more bikes hopefully means… 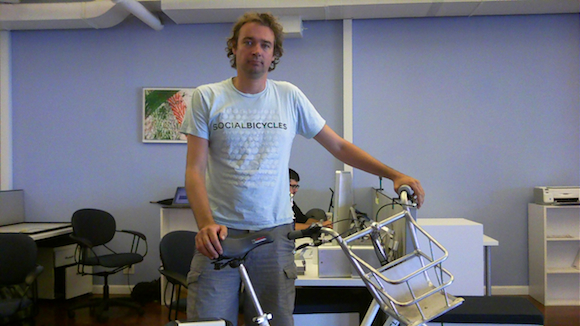 More and more cities are expanding their options for cyclists in an effort to go green and reduce traffic congestion, as more bikes hopefully means fewer cars. London has Barclays Cycle Hire while New York City is soon to have a Citi Bike system of its own. These systems work the same way: pick up a bike from one docking station, ride it around, and return it to another station. But if a station is far from where you are or where you want to go, you’re out of luck.
New York City-based startup Social Bicycles solves this problem by having smart bikes, rather than smart docks. Its custom bicycles have a keypad and GPS built in. Operators who license the technology can set up hubs, where you can pick up a bike using a smartphone app to unlock it. After use, you drop it off at another hub for free, or leave it outside a hub for a small fee. If the next user of the bike returns it to the hub, they get a credit for good behavior. This flexible incentivized system should ensure an even distribution of bikes and allows for more meandering trips that a traditional bike sharing station doesn’t.
Best of all, the bike is completely green. The electronics are powered by pedalling, with an extra solar panel for backup. Check out the interview below with founder Ryan Rzepecki for more specifics on how the system works and a closer look at the actual bicycles.

Some choice excerpts from the video:
Q: What are your plans for NYC?

A: In the long term, we hope that we can work with the Citi Bike program, to extend the reach of that system, because there’s no way they’re going to be able to service parts of Queens, and the Bronx, and Brooklyn with that model.
Q: Are you worried about someone hacking into your high-tech bikes?

A: There’s a project in Germany, there’s a Call A Bike bike share system, and some hackers actually did break in and put an unlock code on the bike. I’m less concerned about that with ours because the way our system works, the way it’s reporting, and the fact that we have real-time communications between the bike and the central server.
Q: Can you use the bikes without a smartphone?

A: One of the next steps in the future is to be able to unlock directly from the keypad interface so if your phone goes dead you can enter your account number and pin code into the keypad and that will unlock the bike.