When the Greek chocolate brand Lacta switched from its iconic red and white paper packaging to a new plastic wrapper, it brought with it an unexpected… 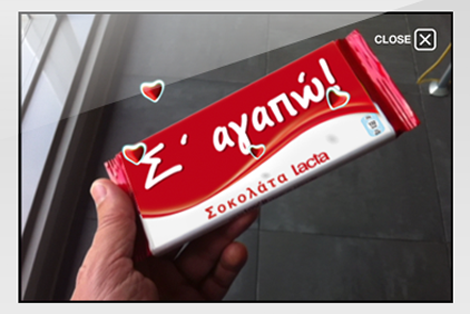 When the Greek chocolate brand Lacta switched from its iconic red and white paper packaging to a new plastic wrapper, it brought with it an unexpected controversy. The many young couples that had stuck to the local tradition of exchanging notes scribbled on the chocolate bars were suddenly at a loss.

OglivyOne Athens has thus come up with a mobile app, which, using augmented reality, allows this tradition to live on in this age of technology. The idea seems to have sprung from the original Lacta Chocolate Facebook App, through which people could customize a Lacta chocolate wrapper in their loved ones’ names, comparing it to a particular Lacta flavor and then posting a picture of the customized wrapper on the recipients' Facebook walls.

The Android and iOS app created by OgilvyOne works by detecting the Lacta logo on the chocolate bar and replacing it with a customizable message. The technology behind it isn’t too complex, but the implementation looks very clean and realistic, and it suggests a new way for couples to interact with one another, particularly if, as is common these days, they live far apart.

Once they’ve downloaded the free Lacta app, users begin by composing the message they wish to appear on the Lacta chocolate bar. Next, users must log-in to their Facebook accounts via the app and choose whom they want to send their message to from their friend list. The recipient receives a Facebook notification, and once they download the app as well, the camera of their phone automatically turns on. When the Lacta bar is then viewed through the camera, the message will reveals itself on the recipient’s screen.

As far as the usefulness of the app goes, it may be seen as mildly inconvenient that the recipient must download the app before they’re able to view the message - not to mention that it may also ruin any element of surprise. It’s also a little strange that the intended receiver of the message will have go out and buy the chocolate beforehand; however, the user could use that to his advantage and make a present of the chocolate bar itself beforehand. It would be nice, though, if the app also allowed users to purchase a bar and send over a redeem code to be scanned at a store, making it slightly more user friendly.

While the app would probably be incredibly popular and useful now, around Valentine’s Day, it is currently only available in Greece. As augmented reality becomes increasingly common, however, you should expect to see this type of campaign spread throughout the world.