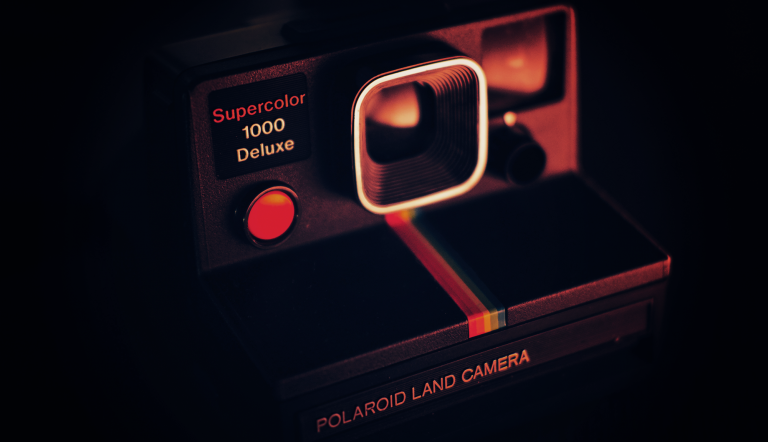 The claim that addictive interfaces and app stickiness is inflicting damage on users is being met by a rise in retro tech that fights back.

There were hints of it in the boom of faux wood laminate phone cases. The arrival of vinyl copies of Blonde on Blonde in suburban Barnes and Nobles. Users were making an aesthetic choice that asked technology to ditch the slick futurism. The trend: offering users limited features, and making the interface feel like a throwback to a better time — retro tech.

Ahead of the crowd in many respects, Instagram's original button was a throwback to the Polaroid OneStep SX-07 camera. Other apps have found different ways to recall a time before tech saturation, before Candy Crush. Think all the messy doodling apps out there, the nostalgia for the layerless pixel bog of Microsoft Paint.

A Piece of History in Your Pocket

In February, Blackberry released a throwback, the Blackberry KeyOne, designed to remind users of the good old days spent with their Blackberry 9900s (those keyboards).

Quite tellingly, even the new iPhone 8, created to be a one-design-fits-all and to serve user needs the user isn't yet aware of, will reportedly be released in two new and notable shades. The retro matte black brings to mind the clunky dashboards of TIIE fighters and Commodore 64 keyboards. The metallic "copper" recalls Millennial pink, which, in return, is a throwback to the "flesh" colored Crayola of the '80s. (Whose flesh? Barbie's.) My question is when the cream-grey of Amiga computers returns for mass consumption.

Against Shiny and Fast

We got a preview of the kickback against shiny, flashy tech in the reviled Star Wars prequels. Droids had undergone an evolution to become longer, rounded, sleek Honda CRVs that can kill; cities in the galaxy were vertical light-boards filled with whizzing pods. People hated it. Joss Whedon put a focus on dinged, battered tech in his own offering, The Force Awakens. The bloopy-blorpy BB-8 was an instant fan favorite.

Mounting an experimental defense against technological progress and increasingly "sticky" interfaces is Minutiae. The app asks users to take a snapshot at a random time each day, then allows ten seconds of scrolling through other users' photos. There is no curating, no liking, just seeing and snapping. That we see this project as radical rather than the beta of a product soon to have more features is important. It's designed to be an antidote to social media.

Limiting Rather Than Expanding User Options

At The Atlantic, Alexis Madrigal has offered up a defense of Instagram's "link in bio" capability — so limiting that it changes the way the platform interacts with the rest of the internet:

Instagram has never become a full participant in the web. By refusing to allow hyperlinks, it has maintained a distinct space on the internet. Twitter and Facebook expanded to become a messy, permeable front end for the whole of the web (even as they try to claw ever more video minutes/ads into their players).

It's an argument for offering less.

Though it isn't a competitor, the Fujimax Instamatic camera, available at Urban Outfitters across the nation, is proof that lofi, shitty photography has a place in a world defined by clarity , brightness, and saturation toggles.

Of course, trends come and go. Cars and phones go boxy, then sleek, then someone decides to bring shoulder pads back and we're right back to carrying around smartphones with keyboards on their faces. But the argument that people like Madrigal are making, and which empathy experts have made, is that we are reaching a point where the attention spans of users are stretched too far. Where seamlessness and addictive interfaces and stickiness is inflicting damage on users. Perhaps, they seem to argue, if 2017 wasn't such a waking nightmare, we might be able to handle the in-your-face nature of tech. The content we find online is part of the reason it's so exhausting to spend time there.

Even if you think 2017 is fine and good, there is an argument to be made for moderation. And everyone has an appetite for a little bit of a throwback. Each of these little acts of nostalgia works as a defense of the disconnected life.